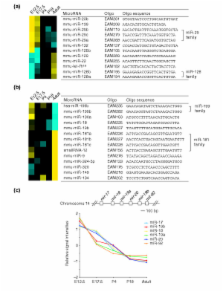 A microarray technology suitable for analyzing the expression of microRNAs and of other small RNAs was used to determine the microRNA expression profile during mouse-brain development and observed a temporal wave of gene expression of sequential classes of microRNAs.

MicroRNAs are a large new class of tiny regulatory RNAs found in nematodes, plants, insects and mammals. MicroRNAs are thought to act as post-transcriptional modulators of gene expression. In invertebrates microRNAs have been implicated as regulators of developmental timing, neuronal differentiation, cell proliferation, programmed cell death and fat metabolism. Little is known about the roles of microRNAs in mammals.

We describe a microarray technology that can be used to analyze the expression of microRNAs and of other small RNAs. MicroRNA microarrays offer a new tool that should facilitate studies of the biological roles of microRNAs. We used this method to determine the microRNA expression profile during mouse brain development and observed a temporal wave of gene expression of sequential classes of microRNAs.

P. T. Spellman, P. O. Brown, D Botstein … (1998)
A system of cluster analysis for genome-wide expression data from DNA microarray hybridization is described that uses standard statistical algorithms to arrange genes according to similarity in pattern of gene expression. The output is displayed graphically, conveying the clustering and the underlying expression data simultaneously in a form intuitive for biologists. We have found in the budding yeast Saccharomyces cerevisiae that clustering gene expression data groups together efficiently genes of known similar function, and we find a similar tendency in human data. Thus patterns seen in genome-wide expression experiments can be interpreted as indications of the status of cellular processes. Also, coexpression of genes of known function with poorly characterized or novel genes may provide a simple means of gaining leads to the functions of many genes for which information is not available currently.

Bruce Wightman, Ilho Ha, Gary Ruvkun (1993)
During C. elegans development, the temporal pattern of many cell lineages is specified by graded activity of the heterochronic gene Lin-14. Here we demonstrate that a temporal gradient in Lin-14 protein is generated posttranscriptionally by multiple elements in the lin-14 3'UTR that are regulated by the heterochronic gene Lin-4. The lin-14 3'UTR is both necessary and sufficient to confer lin-4-mediated posttranscriptional temporal regulation. The function of the lin-14 3'UTR is conserved between C. elegans and C. briggsae. Among the conserved sequences are seven elements that are each complementary to the lin-4 RNAs. A reporter gene bearing three of these elements shows partial temporal gradient activity. These data suggest a molecular mechanism for Lin-14p temporal gradient formation: the lin-4 RNAs base pair to sites in the lin-14 3'UTR to form multiple RNA duplexes that down-regulate lin-14 translation.

N. Lau, L. P. Lim, E G Weinstein … (2001)
Two small temporal RNAs (stRNAs), lin-4 and let-7, control developmental timing in Caenorhabditis elegans. We find that these two regulatory RNAs are members of a large class of 21- to 24-nucleotide noncoding RNAs, called microRNAs (miRNAs). We report on 55 previously unknown miRNAs in C. elegans. The miRNAs have diverse expression patterns during development: a let-7 paralog is temporally coexpressed with let-7; miRNAs encoded in a single genomic cluster are coexpressed during embryogenesis; and still other miRNAs are expressed constitutively throughout development. Potential orthologs of several of these miRNA genes were identified in Drosophila and human genomes. The abundance of these tiny RNAs, their expression patterns, and their evolutionary conservation imply that, as a class, miRNAs have broad regulatory functions in animals.