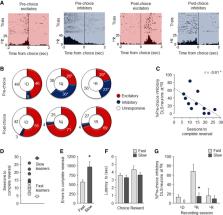 Most experimental preparations demonstrate a role for dorsolateral striatum (DLS) in stimulus-response, but not outcome-based, learning. Here, we assessed DLS involvement in a touchscreen-based reversal task requiring mice to update choice following a change in stimulus-reward contingencies. In vivo single-unit recordings in the DLS showed reversal produced a population-level shift from excited to inhibited neuronal activity prior to choices being made. The larger the shift, the faster mice reversed. Furthermore, optogenetic photosilencing DLS neurons during choice increased early reversal errors. These findings suggest dynamic DLS engagement may facilitate reversal, possibly by signaling a change in contingencies to other striatal and cortical regions.

Bernard W. Balleine, John O'Doherty (2010)
Recent behavioral studies in both humans and rodents have found evidence that performance in decision-making tasks depends on two different learning processes; one encoding the relationship between actions and their consequences and a second involving the formation of stimulus-response associations. These learning processes are thought to govern goal-directed and habitual actions, respectively, and have been found to depend on homologous corticostriatal networks in these species. Thus, recent research using comparable behavioral tasks in both humans and rats has implicated homologous regions of cortex (medial prefrontal cortex/medial orbital cortex in humans and prelimbic cortex in rats) and of dorsal striatum (anterior caudate in humans and dorsomedial striatum in rats) in goal-directed action and in the control of habitual actions (posterior lateral putamen in humans and dorsolateral striatum in rats). These learning processes have been argued to be antagonistic or competing because their control over performance appears to be all or none. Nevertheless, evidence has started to accumulate suggesting that they may at times compete and at others cooperate in the selection and subsequent evaluation of actions necessary for normal choice performance. It appears likely that cooperation or competition between these sources of action control depends not only on local interactions in dorsal striatum but also on the cortico-basal ganglia network within which the striatum is embedded and that mediates the integration of learning with basic motivational and emotional processes. The neural basis of the integration of learning and motivation in choice and decision-making is still controversial and we review some recent hypotheses relating to this issue.

Actions and Habits: The Development of Behavioural Autonomy

Neural systems of reinforcement for drug addiction: from actions to habits to compulsion.

Barry Everitt, Trevor W. Robbins (2005)
Drug addiction is increasingly viewed as the endpoint of a series of transitions from initial drug use--when a drug is voluntarily taken because it has reinforcing, often hedonic, effects--through loss of control over this behavior, such that it becomes habitual and ultimately compulsive. Here we discuss evidence that these transitions depend on interactions between pavlovian and instrumental learning processes. We hypothesize that the change from voluntary drug use to more habitual and compulsive drug use represents a transition at the neural level from prefrontal cortical to striatal control over drug seeking and drug taking behavior as well as a progression from ventral to more dorsal domains of the striatum, involving its dopaminergic innervation. These neural transitions may themselves depend on the neuroplasticity in both cortical and striatal structures that is induced by chronic self-administration of drugs.

This is a work of the US Government.