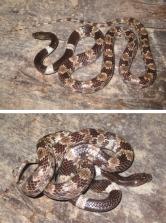 A new species of the genus Lycodon is described from Cao Bang Province, Vietnam, based on three individuals with distinct differences in morphology and molecular data. The new species is differentiated from its congeners by a combination of the following characters: dorsal scales in 17-17-15 rows, smooth throughout; supralabials usually eight (rarely nine); infralabials ten; one elongated loreal on each side, in contact with the eye; precloacal plate single; ventral scales 212–218 (plus one or two preventral scales); subcaudals 90 or 91; maxillary teeth 13 or 14; dorsal surface of body with 28 or 29 light body bands; dorsal surface of tail with 13 cream bands, forming a distinct blotch in the vertebral region. Based on phylogenetic analyses of mitochondrial cytochrome b sequence data, the new species is recovered as the sister species to a clade containing L. multizonatus and L. liuchengchaoi with strong support from the Bayesian analysis. The new species is at least 7.5% divergent from other species within this clade in uncorrected pairwise distance calculated using a fragment of more than 1000 bp of the mitochondrial cytochrome b. This discovery increases the number of Lycodon species known from Vietnam to 16.

A molecular phylogeny of tortoises (Testudines: Testudinidae) based on mitochondrial and nuclear genes.

Christopher J. Raxworthy,  Edward L. Mertz,  W P McCord … (2006)
Although tortoises of the family Testudinidae represent a familiar and widely distributed group of turtles, their phylogenetic relationships have remained contentious. In this study, we included 32 testudinid species (all genera and subgenera, and all species of Geochelone, representing 65% of the total familial species diversity), and both mitochondrial (12S rRNA, 16S rRNA, and cytb) and nuclear (Cmos and Rag2) DNA data with a total of 3387 aligned characters. Using diverse phylogenetic methods (Maximum Parsimony, Maximum Likelihood, and Bayesian Analysis) congruent support is found for a well-resolved phylogeny. The most basal testudinid lineage includes a novel sister relationship between Asian Manouria and North American Gopherus. In addition, this phylogeny supports two other major testudinid clades: Indotestudo+Malacochersus+Testudo; and a diverse clade including Pyxis, Aldabrachelys, Homopus, Chersina, Psammobates, Kinixys, and Geochelone. However, we find Geochelone rampantly polyphyletic, with species distributed in at least four independent clades. Biogeographic analysis based on this phylogeny is consistent with an Asian origin for the family (as supported by the fossil record), but rejects the long-standing hypothesis of South American tortoises originating in North America. By contrast, and of special significance, our results support Africa as the ancestral continental area for all testudinids except Manouria and Gopherus. Based on our systematic findings, we also propose modifications concerning Testudinidae taxonomy.