In vivo and in vitro Models of Demyelinating Diseases 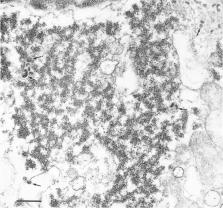 The developmental sequence of a neurotropic strain (JHM) of mouse hepatitis virus was examined by transmission electron microscopy and immunocytology. The nucleo-protein core of this coronavirus, which contains RNA of positive polarity and is helical in configuration, becomes incorporated into enveloped particles in the same manner as the nucleocapsids of the orthomyxo- and paramyxoviruses. However, JHM virus is assembled intracellularly by budding at surfaces of smooth membranous vacuoles. A comparison of JHMvirus replication in L2 and 17C1-1 cell lines revealed that L2 cells undergo more rapid cytopathology and cease virus production much sooner than 17C1-1 cells. In L2 cells the accumulation of core material appears to continue after the abrupt cessation of virus assembly. This is evident by the massive cytoplasmic accumulation of structures resembling nucleocapsids, which react with hybridoma antibody to the nucleocapsid antigen as demonstrated by the immunoperoxidase procedure. The current findings are consistent with our previously published demonstration, using cells of neural and other deviation, of the fundamental role of the host cell type in regulating the replication and expression of coronaviruses.

J. F. David-Ferreira,  R. A. Manaker (1965)
Samples taken at different intervals of time from suspension cultures of the NCTC 1469 line of mouse liver—derived (ML) cells infected with a mouse hepatitis virus have been studied with the electron microscope. The experiments revealed that the viruses are incorporated into the cells by viropexis within 1 hour after being added to the culture. An increasing number of particles are found later inside dense cytoplasmic corpuscles similar to lysosomes. In the cytoplasm of the cells from the samples taken 7 hours after inoculation, two organized structures generally associated and never seen in the controls are observed: one consists of dense material arranged in a reticular disposition (reticular inclusion); the other is formed by small tubules organized in a complex pattern (tubular body). No evidence has been found concerning their origin. Their significance is discussed. With the progression of the infection a system of membrane-bounded tubules and cisternae is differentiated in the cytoplasm of the ML cells. In the lumen of these tubules or cisternae, which are occupied by a dense material, numerous virus particles are observed. The virus particles which originate in association with the limiting membranes of tubules and cisternae are released into their lumen by a "budding" process. The virus particles are 75 mµ in diameter and possess a nucleoid constituted of dense particles or rods limiting an electron transparent core. The virus limiting membrane is sometimes covered by an outer layer of a dense material. In the cells from the samples taken 14 to 20 hours after inoculation, larger zones of the cell cytoplasm are occupied by inclusion bodies formed by channels or cisternae with their lumens containing numerous virus particles. In the samples taken 20 hours or more after the inoculation numerous cells show evident signs of degeneration.

R. Chanock,  J Dees,  Michael W. Becker … (1967)
Avian infectious bronchitis virus (IBV) and strain 229E, a virus recently recovered from patients with colds, have been shown to possess a similar distinctive morphology in negatively stained preparations. An electron microscopic study of the morphogenesis of IBV in the chorioallantoic membrane and of strain 229E in WI-38 cells was performed. In infected cells, round electron-dense particles 82 mmu in diameter were observed to form by a process of budding from membranes of the endoplasmic reticulum and cytoplasmic vesicles. The particles in IBV-infected cells were similar in size and shape to those in strain 229E-infected cells but showed certain differences in internal structure. The evidence that the particles represent virions and the implications of these findings in the classification of this virus group are discussed.

Robert Knobler,  Monique Dubois-Dalcq,  Martin Haspel … (1981)
Demyelination may be induced by several different pathogenetic mechanisms. We have been utilizing mouse hepatitis virus (MHV) to study virus-induced demyelination in the central nervous system (CNS). To learn whether the different disease phenotypes in 4-week-old mice, caused by wild type (a model for fatal encephalomyelitis) or mutant ts8 (a model for primary demyelination), is due to an altered cellular tropism, we have developed an immunolabeling technique to evaluate critically the localization of MHV antigens in the unique cells of the CNS. Using mouse derived L-cells and primary neuronal cells in vitro, we determined an appropriate fixative (4% paraformaldehyde and 0.5% glutaraldehyde) that both preserved MHV antigenicity and cell structure. These studies in vitro showed the presence of MHV antigens on the surface of cells. Utilizing immunoperoxidase labeling as developed, we studied the localization of MHV antigens in vivo. MHV antigens associated with wild type (wt) virus were localized in neuronal cells as well as oligodendrocytes, which might account for the encephalomyelitis and primary demyelination, respectively. In contrast, MHV antigens associated with ts8 were localized rarely in neurons but commonly in oligodendrocytes. This might account for the uncommon occurrence of fatal encephalomyelitis, but the frequent presence of primary demyelination. Of interest was the finding of viral antigens during MHV infection in the cytoplasmic processes of oligodendrocytes surrounding intact myelin sheaths. We conclude that the different disease phenotypes caused by wt and mutant ts8 reflect differences in the cellular tropism of the two viruses for cells in the CNS.