A review of tasquinimod in the treatment of advanced prostate cancer 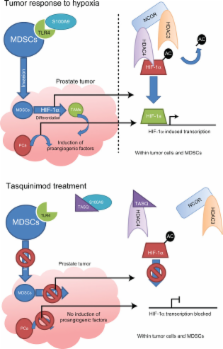 Castration resistant prostate cancer remains a major clinical burden and novel therapeutic options are urgently required to improve survival. Tasquinimod is an orally administered quinoline-3-carboxamide with potent antiangiogenic and antitumorigenic action that has shown promise in the treatment of advanced prostate cancers. This review explores both preclinical and clinical findings to date. In summary, tasquinimod has been shown to demonstrate a potent in vitro and in vivo anticancer action and completed early phase clinical trials have demonstrated good drug tolerance and prolonged progression-free survival. Although Phase III clinical trials are on-going, the findings to date highlight the promise of this drug in the treatment of advanced prostate cancer.

Estimates of cancer incidence and mortality in Europe in 2008.

J Ferlay,  D.M. PARKIN,  E Steliarova-Foucher (2010)
Up-to-date statistics on cancer occurrence and outcome are essential for the planning and evaluation of programmes for cancer control. Since the relevant information for 2008 is not generally available as yet, we used statistical models to estimate incidence and mortality data for 25 cancers in 40 European countries (grouped and individually) in 2008. The calculations are based on published data. If not collected, national rates were estimated from national mortality data and incidence and mortality data provided by local cancer registries of the same or neighbouring country. The estimated 2008 rates were applied to the corresponding country population estimates for 2008 to obtain an estimate of the numbers of cancer cases and deaths in Europe in 2008. There were an estimated 3.2 million new cases of cancer and 1.7 million deaths from cancer in 2008. The most common cancers were colorectal cancers (436,000 cases, 13.6% of the total), breast cancer (421,000, 13.1%), lung cancer (391,000, 12.2%) and prostate cancer (382,000, 11.9%). The most common causes of death from cancer were lung cancer (342,000 deaths, 19.9% of the total), colorectal cancer (212,000 deaths, 12.3%), breast cancer (129,000, 7.5%) and stomach cancer (117,000, 6.8%). Copyright 2009 Elsevier Ltd. All rights reserved.