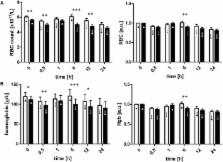 Aim: An activation of non-specific inflammatory response, coagulation disorder, and blood morphotic elements damage are the main side effects of the extracorporeal circulation (ECC). Red-to-near-infrared radiation (R/NIR) is thought to be capable of stabilizing red blood cell (RBC) membrane through increasing its resistance to destructive factors. We focused on the development of a method using low-level light therapy (LLLT) in the spectral range of R/NIR which could reduce blood trauma caused by the heart-lung machine during surgery.

Results: In the control group, a rapid systemic decrease in WBC count during ECC was accompanied by a significant increase in RBC membrane lipids peroxidation, while in the LLLT group the number of WBC and TBARS concentration both remained relatively constant, indicating limitation of the inflammatory process. These results were consistent with the change in the hemolysis markers like PFHgb, LDH, and serum bilirubin concentration, which were significantly reduced in LLLT group. No differences in TAC, RBC count, and Hgb concentration were detected.

Conclusion: We presented the applicability of the LLLT with R/NIR radiation to blood trauma reduction during ECC.

Photoperoxidation in isolated chloroplasts. I. Kinetics and stoichiometry of fatty acid peroxidation.

The clinical sequelae of intravascular hemolysis and extracellular plasma hemoglobin: a novel mechanism of human disease.

Peter Hillmen,  Mark Gladwin,  Russell Rother … (2005)
The efficient sequestration of hemoglobin by the red blood cell membrane and the presence of multiple hemoglobin clearance mechanisms suggest a critical need to prevent the buildup of this molecule in the plasma. A growing list of clinical manifestations attributed to hemoglobin release in a variety of acquired and iatrogenic hemolytic disorders suggests that hemolysis and hemoglobinemia should be considered as a novel mechanism of human disease. Pertinent scientific literature databases and references were searched through October 2004 using terms that encompassed various aspects of hemolysis, hemoglobin preparations, clinical symptoms associated with plasma hemoglobin, nitric oxide in hemolysis, anemia, pulmonary hypertension, paroxysmal nocturnal hemoglobinuria, and sickle-cell disease. Hemoglobin is released into the plasma from the erythrocyte during intravascular hemolysis in hereditary, acquired, and iatrogenic hemolytic conditions. When the capacity of protective hemoglobin-scavenging mechanisms has been saturated, levels of cell-free hemoglobin increase in the plasma, resulting in the consumption of nitric oxide and clinical sequelae. Nitric oxide plays a major role in vascular homeostasis and has been shown to be a critical regulator of basal and stress-mediated smooth muscle relaxation and vasomotor tone, endothelial adhesion molecule expression, and platelet activation and aggregation. Thus, clinical consequences of excessive cell-free plasma hemoglobin levels during intravascular hemolysis or the administration of hemoglobin preparations include dystonias involving the gastrointestinal, cardiovascular, pulmonary, and urogenital systems, as well as clotting disorders. Many of the clinical sequelae of intravascular hemolysis in a prototypic hemolytic disease, paroxysmal nocturnal hemoglobinuria, are readily explained by hemoglobin-mediated nitric oxide scavenging. A growing body of evidence supports the existence of a novel mechanism of human disease, namely, hemolysis-associated smooth muscle dystonia, vasculopathy, and endothelial dysfunction.

This article was submitted to Membrane Physiology and Membrane Biophysics, a section of the journal Frontiers in Physiology