Vaccine candidate discovery for the next generation of malaria vaccines 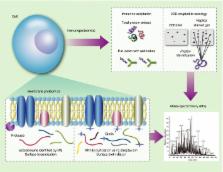 Although epidemiological observations, IgG passive transfer studies and experimental infections in humans all support the feasibility of developing highly effective malaria vaccines, the precise antigens that induce protective immunity remain uncertain. Here, we review the methodologies applied to vaccine candidate discovery for Plasmodium falciparum malaria from the pre‐ to post‐genomic era. Probing of genomic and cDNA libraries with antibodies of defined specificities or functional activity predominated the former, whereas reverse vaccinology encompassing high throughput in silico analyses of genomic, transcriptomic or proteomic parasite data sets is the mainstay of the latter. Antibody‐guided vaccine design spanned both eras but currently benefits from technological advances facilitating high‐throughput screening and downstream applications. We make the case that although we have exponentially increased our ability to identify numerous potential vaccine candidates in a relatively short space of time, a significant bottleneck remains in their validation and prioritization for evaluation in clinical trials. Longitudinal cohort studies provide supportive evidence but results are often conflicting between studies. Demonstration of antigen‐specific antibody function is valuable but the relative importance of one mechanism over another with regards to protection remains undetermined. Animal models offer useful insights but may not accurately reflect human disease. Challenge studies in humans are preferable but prohibitively expensive. In the absence of reliable correlates of protection, suitable animal models or a better understanding of the mechanisms underlying protective immunity in humans, vaccine candidate discovery per se may not be sufficient to provide the paradigm shift necessary to develop the next generation of highly effective subunit malaria vaccines.

Discovery of gene function by expression profiling of the malaria parasite life cycle.

Damian Grainger,  Patricia Vega,  Serge Batalov … (2003)
The completion of the genome sequence for Plasmodium falciparum, the species responsible for most malaria human deaths, has the potential to reveal hundreds of new drug targets and proteins involved in pathogenesis. However, only approximately 35% of the genes code for proteins with an identifiable function. The absence of routine genetic tools for studying Plasmodium parasites suggests that this number is unlikely to change quickly if conventional serial methods are used to characterize encoded proteins. Here, we use a high-density oligonucleotide array to generate expression profiles of human and mosquito stages of the malaria parasite's life cycle. Genes with highly correlated levels and temporal patterns of expression were often involved in similar functions or cellular processes.

Malaria resurgence: a systematic review and assessment of its causes

Justin Cohen,  David Smith,  Chris Cotter … (2012)
Background Considerable declines in malaria have accompanied increased funding for control since the year 2000, but historical failures to maintain gains against the disease underscore the fragility of these successes. Although malaria transmission can be suppressed by effective control measures, in the absence of active intervention malaria will return to an intrinsic equilibrium determined by factors related to ecology, efficiency of mosquito vectors, and socioeconomic characteristics. Understanding where and why resurgence has occurred historically can help current and future malaria control programmes avoid the mistakes of the past. Methods A systematic review of the literature was conducted to identify historical malaria resurgence events. All suggested causes of these events were categorized according to whether they were related to weakened malaria control programmes, increased potential for malaria transmission, or technical obstacles like resistance. Results The review identified 75 resurgence events in 61 countries, occurring from the 1930s through the 2000s. Almost all resurgence events (68/75 = 91%) were attributed at least in part to the weakening of malaria control programmes for a variety of reasons, of which resource constraints were the most common (39/68 = 57%). Over half of the events (44/75 = 59%) were attributed in part to increases in the intrinsic potential for malaria transmission, while only 24/75 (32%) were attributed to vector or drug resistance. Conclusions Given that most malaria resurgences have been linked to weakening of control programmes, there is an urgent need to develop practical solutions to the financial and operational threats to effectively sustaining today’s successful malaria control programmes.

This review covers our advances in identifying potential P. falciparum vaccine candidates using reverse vaccinology and highlights the still significant bottleneck in our ability to validate and prioritizate new candidates for evaluation in clinical trials.