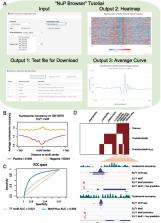 The NUCOME provides valuable data resources for integrative analyses focus on nucleosome organization. The NUCOME is freely available at http://compbio-zhanglab.org/NUCOME.

A barrier nucleosome model for statistical positioning of nucleosomes throughout the yeast genome.

Randall B. Pugh,  Ilya Ioshikhes,  Lynn Tomsho … (2008)
Most nucleosomes are well-organized at the 5' ends of S. cerevisiae genes where "-1" and "+1" nucleosomes bracket a nucleosome-free promoter region (NFR). How nucleosomal organization is specified by the genome is less clear. Here we establish and inter-relate rules governing genomic nucleosome organization by sequencing DNA from more than one million immunopurified S. cerevisiae nucleosomes (displayed at http://atlas.bx.psu.edu/). Evidence is presented that the organization of nucleosomes throughout genes is largely a consequence of statistical packing principles. The genomic sequence specifies the location of the -1 and +1 nucleosomes. The +1 nucleosome forms a barrier against which nucleosomes are packed, resulting in uniform positioning, which decays at farther distances from the barrier. We present evidence for a novel 3' NFR that is present at >95% of all genes. 3' NFRs may be important for transcription termination and anti-sense initiation. We present a high-resolution genome-wide map of TFIIB locations that implicates 3' NFRs in gene looping.

MeCP2 binds to non-CG methylated DNA as neurons mature, influencing transcription and the timing of onset for Rett syndrome.

Lin Chen,  Kaifu Chen,  Laura Lavery … (2015)
Epigenetic mechanisms, such as DNA methylation, regulate transcriptional programs to afford the genome flexibility in responding to developmental and environmental cues in health and disease. A prime example involving epigenetic dysfunction is the postnatal neurodevelopmental disorder Rett syndrome (RTT), which is caused by mutations in the gene encoding methyl-CpG binding protein 2 (MeCP2). Despite decades of research, it remains unclear how MeCP2 regulates transcription or why RTT features appear 6-18 months after birth. Here we report integrated analyses of genomic binding of MeCP2, gene-expression data, and patterns of DNA methylation. In addition to the expected high-affinity binding to methylated cytosine in the CG context (mCG), we find a distinct epigenetic pattern of substantial MeCP2 binding to methylated cytosine in the non-CG context (mCH, where H = A, C, or T) in the adult brain. Unexpectedly, we discovered that genes that acquire elevated mCH after birth become preferentially misregulated in mouse models of MeCP2 disorders, suggesting that MeCP2 binding at mCH loci is key for regulating neuronal gene expression in vivo. This pattern is unique to the maturing and adult nervous system, as it requires the increase in mCH after birth to guide differential MeCP2 binding among mCG, mCH, and nonmethylated DNA elements. Notably, MeCP2 binds mCH with higher affinity than nonmethylated identical DNA sequences to influence the level of Bdnf, a gene implicated in the pathophysiology of RTT. This study thus provides insight into the molecular mechanism governing MeCP2 targeting and sheds light on the delayed onset of RTT symptoms.