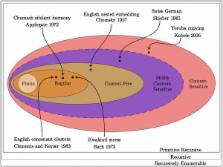 Recent advances in genetics and neurobiology have greatly increased the degree of variation that one finds in what is taken to provide the biological foundations of our species-specific linguistic capacities. In particular, this variation seems to cast doubt on the purportedly homogeneous nature of the language faculty traditionally captured by the concept of “Universal Grammar.” In this article we discuss what this new source of diversity reveals about the biological reality underlying Universal Grammar. Our discussion leads us to support (1) certain hypotheses advanced in evolutionary developmental biology that argue for the existence of robust biological mechanisms capable of canalizing variation at different levels, and (2) a bottom-up perspective on comparative cognition. We conclude by sketching future directions for what we call “comparative biolinguistics,” specifying which experimental directions may help us succeed in this new research avenue.

Evolutionary capacitance as a general feature of complex gene networks.

Aviv Bergman,  Mark Siegal (2003)
An evolutionary capacitor buffers genotypic variation under normal conditions, thereby promoting the accumulation of hidden polymorphism. But it occasionally fails, thereby revealing this variation phenotypically. The principal example of an evolutionary capacitor is Hsp90, a molecular chaperone that targets an important set of signal transduction proteins. Experiments in Drosophila and Arabidopsis have demonstrated three key properties of Hsp90: (1) it suppresses phenotypic variation under normal conditions and releases this variation when functionally compromised; (2) its function is overwhelmed by environmental stress; and (3) it exerts pleiotropic effects on key developmental processes. But whether these properties necessarily make Hsp90 a significant and unique facilitator of adaptation is unclear. Here we use numerical simulations of complex gene networks, as well as genome-scale expression data from yeast single-gene deletion strains, to present a mechanism that extends the scope of evolutionary capacitance beyond the action of Hsp90 alone. We illustrate that most, and perhaps all, genes reveal phenotypic variation when functionally compromised, and that the availability of loss-of-function mutations accelerates adaptation to a new optimum phenotype. However, this effect does not require the mutations to be conditional on the environment. Thus, there might exist a large class of evolutionary capacitors whose effects on phenotypic variation complement the systemic, environment-induced effects of Hsp90.

G. Müller (2007)
Evolutionary developmental biology (evo-devo) explores the mechanistic relationships between the processes of individual development and phenotypic change during evolution. Although evo-devo is widely acknowledged to be revolutionizing our understanding of how the development of organisms has evolved, its substantial implications for the theoretical basis of evolution are often overlooked. This essay identifies major theoretical themes of current evo-devo research and highlights how its results take evolutionary theory beyond the boundaries of the Modern Synthesis.