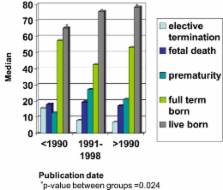 For women who suffer from systemic lupus erythematosus (SLE), pregnancy can be a concern, placing the mother and fetus at risk. Our objectives were to assess the risk of adverse pregnancy outcome, disease flares, fertility rate, and co-morbidities in SLE women compared to healthy controls. We also systematically reviewed the literature available on pregnancy outcome in SLE to compare our results to other published data. Our hypothesis was that pregnancy outcome in SLE is improving over time.

A case-control study comparing self-report of the above-mentioned parameters in SLE (N=108) vs healthy controls or patients with non-inflammatory musculoskeletal (MSK) disorders (N=134) was performed. Data were collected using a self-administered questionnaire. Proportions, means and odds ratios were calculated. We searched and quantified the literature on pregnancy outcome, lupus reactivation and fertility rate. Data were summarized and presented in mean % ± SEM and median % with interquartile range (IQR).

Gynecological history, fertility rate and age at first pregnancy in SLE patients were comparable to controls. Eighteen percent of SLE patients reported a flare and 18% reported an improvement of symptoms during pregnancy. Twenty-four percent of lupus patients had at least one preterm delivery vs 5% in controls (OR =8.32, p = 0.0008), however other pregnancy outcomes (miscarriage, therapeutic abortion, stillbirth and neonatal death rate) did not differ between the groups. Thyroid problems were reported to be more likely in SLE patients (p = 0.02), but the prevalence of other co-morbidities was similar to controls. A literature review demonstrated that fertility was not affected in SLE patients. Lupus reactivations are common during pregnancy (36.5% ± SEM 3.3%). Most agreed that SLE pregnancies had more fetal loss (19.5% ± SEM 1.6%) and preterm births (25.5% ± SEM 2.2%) when compared to the general population. Over time, the rate of SLE peripartum flares has improved (p = 0.002) and the proportion of pregnancies resulting in live birth has increased (p = 0.024). The frequency of fetal death has not significantly changed. Our findings from the case-control study were, in general, consistent with the literature including the frequency of fetal death, neonatal death, live births and pregnancy rate.

Prematurity (25.5% ± SEM 2.2%) and fetal death (19.5% ± SEM 1.6%) in SLE pregnancy are still a concern. However, new strategies with respect to pregnancy timing and multidisciplinary care have improved maternal and fetal outcome in SLE.

J Balow,  D Boumpas,  J Klippel … (1993)
To determine the risk for secondary amenorrhea after pulse cyclophosphamide therapy in premenopausal women with systemic lupus erythematosus. Controlled, retrospective clinical study. Government referral-based research hospital. Thirty-nine women younger than 40 years treated with pulse cyclophosphamide therapy for active lupus nephritis or neuropsychiatric lupus. Sixteen women who received pulses of intravenous methylprednisolone were controls. Sixteen patients received pulse cyclophosphamide (0.5 to 1.0 g/m2 body surface area) monthly for a total of 7 doses (short-CY), and 23 patients received 15 or more doses (long-CY). Control patients were treated with monthly pulses of methylprednisolone (1.0 g/m2) for a total of nine doses. Rates of amenorrhea were evaluated according to duration of treatment (number of doses) and age at the initiation of pulse therapy. Two of 16 patients (12%) in the Short-CY group and 9 of 23 (39%) in the long-CY group developed sustained amenorrhea (P = 0.07). Rates of sustained amenorrhea (short- and long-CY) according to age at the start of pulse therapy were: or = 31 years, 5/8 (62%) (P = 0.04). The increased risk for sustained amenorrhea in patients treated with long-CY was most evident in patients older than 25 years (short-CY [2/12] compared with long-CY [7/11]; P = 0.03). Three other patients with short-CY had reversal of amenorrhea fewer than 12 months after cessation of therapy. Amenorrhea was not observed in any of the 16 control patients. Intermittent pulse cyclophosphamide therapy in patients with systemic lupus erythematosus is associated with sustained amenorrhea, which is related to both age and number of doses of cyclophosphamide.

Clinical predictors of fetal and maternal outcome in systemic lupus erythematosus: a prospective study of 103 pregnancies.

Ruth F. Castillo Cajas,  J M Casellas,  M Tarres … (2002)
Our aim was to assess the outcome of pregnancy in a cohort of patients with SLE and to evaluate clinical and laboratory markers for fetal outcome and maternal flares. Sixty patients with 103 pregnancies were evaluated prospectively between 1984 and 1999. There were 68 live births, 15 spontaneous abortions, 12 stillbirths and eight therapeutic abortions. Of liveborn infant births, 19 were premature, 24 had suffered intrauterine growth restriction and one had neonatal lupus. Maternal lupus flares occurred in 33% of pregnancies, mostly in the second trimester (26%) and in the post-partum period (51%). Flares during pregnancy showed a statistically significant association with discontinuation of chloroquine treatment, a history of more than three flares before gestation, and a SLEDAI (Systemic Lupus Erythematosus Disease Activity Index) score of >or=5 in these flares. Antiphospholipid antibodies, C3 hypocomplementaemia and hypertension during pregnancy were significantly associated with fetal loss, prematurity and intrauterine growth restriction. Patients with more active SLE and those with aPL antibodies and hypertension should be monitored and managed carefully during pregnancy.

Department of Medicine, The University of Western Ontario, London, ON, Canada

This is an open access article licensed under the terms of the Creative Commons Attribution Non-Commercial License ( http://creativecommons.org/licenses/by-nc/3.0/), which permits unrestricted, non-commercial use, distribution and reproduction in any medium, provided the work is properly cited.