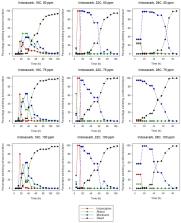 Behavioral symptoms and mortality associated with intoxication with insecticides fipronil and indoxacarb were determined in field-collected eastern subterranean termites, Reticulitermes flavipes (Kollar), and Formosan subterranean termites, Coptotermes formosanus Shiraki. Behaviors and mortality were evaluated at three temperatures (16, 22, and 28 °C) and three concentrations of fipronil (0.5, 1, and 5 ppm) and indoxacarb (50, 75, and 100 ppm). LT 50 (median lethal time to kill 50% of the termites) values declined with increasing concentrations and temperatures for both fipronil-exposed eastern and Formosan subterranean termites, whereas these values were not always the highest at 16 °C for indoxacarb-treated termites. The greatest change (reduction) in LT 50 values occurred for both species between 16 and 22 °C at the lowest concentration of each insecticide. Intoxication and moribundity were the most frequently observed behaviors for fipronil-exposed termites, whereas intoxication, ataxia, and moribundity were observed for most concentration and temperature combinations for indoxacarb-exposed termites. The inherent toxicity of fipronil was higher than that of indoxacarb. The higher presence and duration of intoxication behaviors may positively affect the performance of indoxacarb against subterranean termite colonies.

The life cycle of Reticulitermes spp (Isoptera: Rhinotermitidae): what do we know?

Daniel F B Wright,  Marja Laine (2003)
The subterranean termites in the genus Reticulitermes have a complex and plastic life cycle, which has been the subject of a number of publications over the past century. Given the inherent difficulties in studying such cryptic, eusocial organisms it is not perhaps surprising that the literature on their biology has failed to reach a consensus. An overview of the literature is given, which is followed by a discussion of the various theories on the life cycle of Reticulitermes spp. A substantial proportion of the review focuses on the French literature, which constitutes the majority of the primary sources and can be difficult to access. There are many discrepancies in the literature in terms of the number of instars, the definition of workers and the question of whether they should be termed pseudergates or, potentially, an additional terminology used to differentiate between pseudergates and the true workers seen in the higher termites (Isoptera: Termitidae). It remains very difficult to compare publications as there is little conformity; a problem that is aggravated by a general absence of drawings of the relevant instars. Further work on the biology of Reticulitermes is clearly required. There is also a need for researchers to agree on a standard terminology for this genus. A glossary is provided for the various synonyms and definitions.

Termites as Pests of Buildings