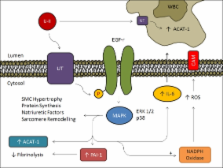 Urotensin II (UII) binds to its receptor, UT, playing an important role in the heart, kidneys, pancreas, adrenal gland, and central nervous system. In the vasculature, it acts as a potent endothelium-independent vasoconstrictor and endothelium-dependent vasodilator. In disease states, however, this constriction–dilation equilibrium is disrupted. There is an upregulation of the UII system in heart disease, metabolic syndrome, and kidney failure. The increase in UII release and UT expression suggest that UII system may be implicated in the pathology and pathogenesis of these diseases by causing an increase in acyl-coenzyme A:cholesterol acyltransferase-1 (ACAT-1) activity leading to smooth muscle cell proliferation and foam cell infiltration, insulin resistance (DMII), as well as inflammation, high blood pressure, and plaque formation. Recently, UT antagonists such as SB-611812, palosuran, and most recently a piperazino-isoindolinone based antagonist have been developed in the hope of better understanding the UII system and treating its associated diseases.

Christian R. Andres, Stephanie J. Tobin, R. DeFronzo (1979)
Methods for the quantification of beta-cell sensitivity to glucose (hyperglycemic clamp technique) and of tissue sensitivity to insulin (euglycemic insulin clamp technique) are described. Hyperglycemic clamp technique. The plasma glucose concentration is acutely raised to 125 mg/dl above basal levels by a priming infusion of glucose. The desired hyperglycemic plateau is subsequently maintained by adjustment of a variable glucose infusion, based on the negative feedback principle. Because the plasma glucose concentration is held constant, the glucose infusion rate is an index of glucose metabolism. Under these conditions of constant hyperglycemia, the plasma insulin response is biphasic with an early burst of insulin release during the first 6 min followed by a gradually progressive increase in plasma insulin concentration. Euglycemic insulin clamp technique. The plasma insulin concentration is acutely raised and maintained at approximately 100 muU/ml by a prime-continuous infusion of insulin. The plasma glucose concentration is held constant at basal levels by a variable glucose infusion using the negative feedback principle. Under these steady-state conditions of euglycemia, the glucose infusion rate equals glucose uptake by all the tissues in the body and is therefore a measure of tissue sensitivity to exogenous insulin.

Minireview: The adipocyte--at the crossroads of energy homeostasis, inflammation, and atherosclerosis.

Michael W. Rajala, Philipp Scherer (2003)
Adipose tissue evolved to efficiently store energy for times of caloric restriction. The large caloric excess common in many Western diets has negated the need for this thrifty function, leaving adipose tissue ill-equipped to handle this increased load. An excess of adipose tissue increases risk for a number of conditions including coronary artery disease, hypertension, dyslipidemias, type 2 diabetes, and even cancer. Indeed, the ability of the adipocyte to function properly when engorged with lipid can lead to lipid accumulation in other tissues, reducing their ability to function and respond normally. The role of adipose tissue as an endocrine organ capable of secreting a number of adipose tissue-specific or enriched hormones, known as adipokines, is gaining appreciation. The normal balance of these adipose tissue secretory proteins is perturbed in obesity. Paradoxically, the lack of normal adipose tissue, as seen in cases of lipodystrophy and lipoatrophy, is also associated with pathologic sequelae similar to what is seen with obesity. The pathologic findings associated with lack of adipose tissue, largely due to inability to properly store lipids, may also be due to a lack of adipokines. In this review, we highlight the role of adipose tissue as an endocrine organ focusing on some of the recent advances in the identification and pharmacological characterization of adipokines as well as their regulation in the context of obesity and insulin-resistant states.

J. S. Real, Wifredo Ricart (2003)
Insulin resistance is increasingly recognized as a chronic, low-level, inflammatory state. Hyperinsulinemia and insulin action were initially proposed as the common preceding factors of hypertension, low high-density lipoprotein cholesterol, hypertriglyceridemia, abdominal obesity, and altered glucose tolerance, linking all these abnormalities to the development of coronary heart disease. The similarities of insulin resistance with another inflammatory state, atherosclerosis, have been described only in the last few decades. Atherosclerosis and insulin resistance share similar pathophysiological mechanisms, mainly due to the actions of the two major proinflammatory cytokines, TNF-alpha and IL-6. Genetic predisposition to increased transcription rates of these cytokines is associated with metabolic derangement and simultaneously with coronary heart disease. Dysregulation of the inflammatory axis predicts the development of insulin resistance and type 2 diabetes mellitus. The knowledge of how interactions between metabolic and inflammatory pathways occur will be useful in future therapeutic strategies. The effective administration of antiinflammatory agents in the treatment of insulin resistance and atherosclerosis is only the beginning of a promising approach in the management of these syndromes.