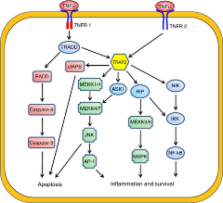 Tumour necrosis factor-alpha (TNF- α) is an important inflammatory factor that acts as a master switch in establishing an intricate link between inflammation and cancer. A wide variety of evidence has pointed to a critical role of TNF- α in tumour proliferation, migration, invasion and angiogenesis. The function of TNF- α as a key regulator of the tumour microenvironment is well recognised. We will emphasise the contribution of TNF- α and the nuclear factor- κB pathway on tumour cell invasion and metastasis. Understanding the mechanisms underlying inflammation-mediated metastasis will reveal new therapeutic targets for cancer prevention and treatment.

Rebekah Bradley (2007)
TNF was originally described as a circulating factor that can cause necrosis of tumours, but has since been identified as a key regulator of the inflammatory response. This review describes the known signalling pathways and cell biological effects of TNF, and our understanding of the role of TNF in human disease. TNF interacts with two different receptors, designated TNFR1 and TNFR2, which are differentially expressed on cells and tissues and initiate both distinct and overlapping signal transduction pathways. These diverse signalling cascades lead to a range of cellular responses, which include cell death, survival, differentiation, proliferation and migration. Vascular endothelial cells respond to TNF by undergoing a number of pro-inflammatory changes, which increase leukocyte adhesion, transendothelial migration and vascular leak and promote thrombosis. The central role of TNF in inflammation has been demonstrated by the ability of agents that block the action of TNF to treat a range of inflammatory conditions, including rheumatoid arthritis, ankylosing spondylitis, inflammatory bowel disease and psoriasis. The increased incidence of infection in patients receiving anti-TNF treatment has highlighted the physiological role of TNF in infectious diseases. 2007 Pathological Society of Great Britain and Ireland

Lionel Larue,  J. Bonaventure,  L Nelles … (2007)
Carcinoma progression is associated with the loss of epithelial features, and the acquisition of mesenchymal characteristics and invasive properties by tumour cells. The loss of cell-cell contacts may be the first step of the epithelium mesenchyme transition (EMT) and involves the functional inactivation of the cell-cell adhesion molecule E-cadherin. Repression of E-cadherin expression by the transcription factor Snail is a central event during the loss of epithelial phenotype. Akt kinase activation is frequent in human carcinomas, and Akt regulates various cellular mechanisms including EMT. Here, we show that Snail activation and consequent repression of E-cadherin may depend on AKT-mediated nuclear factor-kappaB (NF-kappaB) activation, and that NF-kappaB induces Snail expression. Expression of the NF-kappaB subunit p65 is sufficient for EMT induction, validating this signalling module during EMT. NF-kappaB pathway activation is associated with tumour progression and metastasis of several human tumour types; E-cadherin acts as a metastasis suppressor protein. Thus, this signalling and transcriptional network linking AKT, NF-kappaB, Snail and E-cadherin during EMT is a potential target for antimetastatic therapeutics.

Expression of the transcription factors snail, slug, and twist and their clinical significance in human breast cancer.

T. Martin,  Gareth Watkins,  Guoqiang Jiang … (2005)
Slug, Snail, and Twist are transcription factors that regulate the expression of tumor suppressors such as E-cadherin. We examined the distribution and expression of these three molecules together with the methylation of the Twist gene promoter in human breast cancer to elucidate their clinical significance. Frozen sections from breast cancer primary tumors (tumor, n = 114; background, n = 30) were immunostained with Slug, Snail, and Twist antibodies. RNA was reverse-transcribed, quantified, and analyzed by quantitative polymerase chain reaction (Q-PCR). Results were expressed as copy number of transcript per 50 ng of RNA (standardized against beta-actin). Immunohistochemistry revealed that all three molecules were stained in mammary tissues, with an increase in Twist within tumor tissues; this was supported by Q-PCR analysis. Q-PCR analysis showed that Slug was elevated with increasing tumor grade and prognostic indices. Twist was elevated with increasing nodal involvement (tumor-node-metastasis status). Conversely, Snail was reduced in expression corresponding with prognostic indices and tumor grade. Increased levels of Slug were associated with tumors from patients with metastatic disease or disease recurrence, and increased expression of Twist was associated with tumors from patients who had died from breast cancer. It is interesting to note that Snail expression was significantly reduced in patients with a poor outcome and those who had node-positive tumors. In addition, tumors exhibited methylation of the Twist promoter. These data demonstrate that all three transcription factors have inappropriate expression in breast cancer and that this may play a part in the progression of human breast tumors.