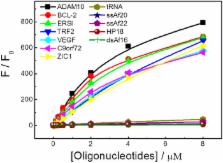 Giulia Biffi,  David Tannahill,  John Mccafferty … (2013)
Four-stranded G-quadruplex nucleic acid structures are of great interest as their high thermodynamic stability under near-physiological conditions suggests that they could form in cells. Here we report the generation and application of an engineered, structure-specific antibody employed to quantitatively visualize DNA G-quadruplex structures in human cells. We show explicitly that G-quadruplex formation in DNA is modulated during cell-cycle progression and that endogenous G-quadruplex DNA structures can be stabilized by a small-molecule ligand. Together these findings provide substantive evidence for the formation of G-quadruplex structures in the genome of mammalian cells and corroborate the application of stabilizing ligands in a cellular context to target G-quadruplexes and intervene with their function.

Prevalence of quadruplexes in the human genome

Julian Huppert,  Shankar Balasubramanian (2005)
Guanine-rich DNA sequences of a particular form have the ability to fold into four-stranded structures called G-quadruplexes. In this paper, we present a working rule to predict which primary sequences can form this structure, and describe a search algorithm to identify such sequences in genomic DNA. We count the number of quadruplexes found in the human genome and compare that with the figure predicted by modelling DNA as a Bernoulli stream or as a Markov chain, using windows of various sizes. We demonstrate that the distribution of loop lengths is significantly different from what would be expected in a random case, providing an indication of the number of potentially relevant quadruplex-forming sequences. In particular, we show that there is a significant repression of quadruplexes in the coding strand of exonic regions, which suggests that quadruplex-forming patterns are disfavoured in sequences that will form RNA.

Adrian V. Lee,  Kathryn Parkinson,  Stephen Neidle (2002)
Telomeric ends of chromosomes, which comprise noncoding repeat sequences of guanine-rich DNA, are fundamental in protecting the cell from recombination and degradation. Disruption of telomere maintenance leads to eventual cell death, which can be exploited for therapeutic intervention in cancer. Telomeric DNA sequences can form four-stranded (quadruplex) structures, which may be involved in the structure of telomere ends. Here we describe the crystal structure of a quadruplex formed from four consecutive human telomeric DNA repeats and grown at a K(+) concentration that approximates its intracellular concentration. K(+) ions are observed in the structure. The folding and appearance of the DNA in this intramolecular quadruplex is fundamentally different from the published Na(+)-containing quadruplex structures. All four DNA strands are parallel, with the three linking trinucleotide loops positioned on the exterior of the quadruplex core, in a propeller-like arrangement. The adenine in each TTA linking trinucleotide loop is swung back so that it intercalates between the two thymines. This DNA structure suggests a straightforward path for telomere folding and unfolding, as well as ways in which it can recognize telomere-associated proteins.