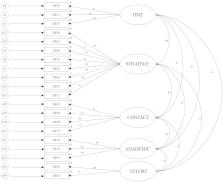 In the education context, The Motivational Strategies for Learning Questionnaire (MSLQ) is extensively used in assessing self-regulated learning strategies. However, more research is needed to address whether it is applicable for distance education. The exploratory and confirmatory factor analysis were used to test the Chinese version of the Motivated Strategies for Learning Questionnaire part-B for distance learning (MSLQ-B-DL) using two samples totalling 385 participants. This paper substantiates MSLQ-B-DL's criterion-related, convergent, and factorial validity, as well as its internal consistency, in China. Specifically, the concurrent validity of the MSLQ-B-DL was shown from three aspects: (a) the negative correlation of MSLQ-B-DL with trait procrastination; (b) the positive correlation of MSLQ-B-DL with self-control; and (c) the positive correlation of MSLQ-B-DL with instrumental help-seeking and the former's negative correlation with help-seeking avoidance and executive help-seeking. Finally, this study highlights the MSLQ-B-DL's validity and reliability in evaluating the learning strategies in adult distance education in China.

The nature of procrastination: a meta-analytic and theoretical review of quintessential self-regulatory failure.

Piers Steel (2007)
Procrastination is a prevalent and pernicious form of self-regulatory failure that is not entirely understood. Hence, the relevant conceptual, theoretical, and empirical work is reviewed, drawing upon correlational, experimental, and qualitative findings. A meta-analysis of procrastination's possible causes and effects, based on 691 correlations, reveals that neuroticism, rebelliousness, and sensation seeking show only a weak connection. Strong and consistent predictors of procrastination were task aversiveness, task delay, self-efficacy, and impulsiveness, as well as conscientiousness and its facets of self-control, distractibility, organization, and achievement motivation. These effects prove consistent with temporal motivation theory, an integrative hybrid of expectancy theory and hyperbolic discounting. Continued research into procrastination should not be delayed, especially because its prevalence appears to be growing. (c) 2007 APA, all rights reserved.

The Role of Goal Orientation in Self-Regulated Learning

This article was submitted to Educational Psychology, a section of the journal Frontiers in Psychology