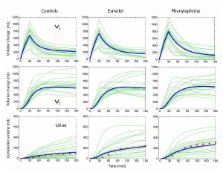 The renal clearance of infused crystalloid fluid is very low during anaesthesia and surgery, but experiments in conscious sheep indicate that the renal fluid clearance might approach a normal rate when the adrenergic balance is modified.

Sixty females (mean age, 32 years) undergoing laparoscopic gynecological surgery were randomized to control group and received only the conventional anesthetic drugs and 20 ml/kg of lactated Ringer's over 30 mins. The others were also given an infusion of 50 μg/kg/min of esmolol (beta 1-receptor blocker) or 0.01 μg/kg/min of phenylephrine (alpha 1-adrenergic agonist) over 3 hours. The distribution and elimination of infused fluid were studied by volume kinetic analysis based on urinary excretion and blood hemoglobin level.

Both drugs significantly increased urinary excretion while heart rate and arterial pressure remained largely unaffected. The urine flows during non-surgery were 43, 147, and 176 ml in the control, esmolol, and phenylephrine groups, respectively (medians, P < 0.03). When surgery had started the corresponding values were 34, 65 and 61 ml ( P < 0.04). At 3 hours, averages of 9%, 20%, and 25% of the infused volume had been excreted in the three groups ( P < 0.01). The kinetic analyses indicated that both treatments slowed down the distribution of fluid from the plasma to the interstitial fluid space, thereby preventing hypovolemia.

R Hahn (2010)
Volume kinetics is a method used for analyzing and simulating the distribution and elimination of infusion fluids. Approximately 50 studies describe the disposition of 0.9% saline, acetated and lactated Ringer's solution, based on repeated measurements of the hemoglobin concentration and (sometimes) the urinary excretion. The slow distribution to the peripheral compartment results in a 50-75% larger plasma dilution during an infusion of crystalloid fluid than would be expected if distribution had been immediate. A drop in the arterial pressure during induction of anesthesia reduces the rate of distribution even further. The renal clearance of the infused fluid during surgery is only 10-20% when compared with that in conscious volunteers. Some of this temporary decrease can be attributed to the anesthesia and probably also to preoperative psychologic stress or dehydration. Crystalloid fluid might be allocated to "nonfunctional" fluid spaces in which it is unavailable for excretion. This amounts to approximately 20-25% during minor (thyroid) surgery.

Dan Drobin,  R Hahn (2002)
Major differences in plasma volume expansion between infusion fluids are fairly well known, but there is a lack of methods that express their dynamic properties. Therefore, a closer description enabled by kinetic modeling is presented. Ten healthy male volunteers received, on different occasions, a constant-rate intravenous infusion over 30 min consisting of 25 ml/kg of 0.9% saline, lactated Ringer's solution, acetated Ringer's solution, 5 ml/kg of 7.5% saline, or 3 ml/kg of 7.5% saline in 6% dextran. One-, two-, and three-volume kinetic models were fitted to the dilution of the total venous hemoglobin concentration over 240 min. Osmotic fluid shifts were considered when hypertonic fluid was infused. All fluids induced plasma dilution, which decreased exponentially after the infusions. The ratio of the area under the dilution-time curve and the infused fluid volume showed the following average plasma-dilution dose-effect (efficiency), using 0.9% saline as the reference (= 1): lactated Ringer's solution, 0.88; acetated Ringer's solution, 0.91; hypertonic saline, 3.97; and hypertonic saline in dextran, 7.22 ("area approach"). Another comparison, based on kinetic analysis and simulation, showed that the strength of the respective fluids to dilute the plasma by 20% within 30 min was 0.94, 0.97, 4.44, and 6.15 ("target dilution approach"). Between-subject variability was approximately half as high for the latter approach. The relative efficiency of crystalloid infusion fluids differs depending on whether the entire dilution-time profile or only the maximum dilution is compared. Kinetic analysis and simulation is a useful tool for the study of such differences.