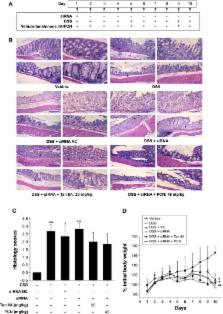 Tanshinone IIA (Tan IIA) (C 19H 18O 3) is one of the major active lipophilic components in a conventional Chinese medicine called danshen, and it has long been used in the People’s Republic of China and other neighboring countries to treat patients suffering from inflammatory bowel disease (IBD). Previous experiments by many teams determined which mechanism of Tan IIA is relevant to the treatment of IBD associated with inflammation and the pregnane X receptor (PXR). The current study demonstrated that Tan IIA is an efficacious PXR agonist and its ability to induce CYP3A4 mRNA and protein expression was mediated by the transactivation of PXR, a known target of abrogating inflammation in IBD. Clinical symptoms in mice and histological assessment data suggested that administration of Tan IIA in mice demonstrated significant protection and showed that in DSS-induced IBD it acts in a concentration-dependent manner. PXR-silenced mice treated with Tan IIA demonstrated low protection against DSS-induced mouse IBD and exacerbated the severity of IBD compared with wild-type mice; PXR-silenced mice demonstrated the necessity for PXR in Tan IIA-mediated upregulation of xenobiotic metabolism genes. The IBD treatment effects of Tan IIA are partially due to PXR-mediated upregulation of xenobiotic metabolism and downregulation of inflammatory mediators. The novel findings reported here may contribute to the effective utilization of Tan IIA and its derivatives as a PXR ligand in the treatment of human IBD. This suggests that Tan IIA may have considerable clinical utility.

Stephen M. Tompkins,  Terrence Tumpey,  Wu-Chia Lo … (2004)
Influenza virus infection is responsible for hundreds of thousands of deaths annually. Current vaccination strategies and antiviral drugs provide limited protection; therefore, new strategies are needed. RNA interference is an effective means of suppressing virus replication in vitro. Here we demonstrate that treatment with small interfering RNAs (siRNAs) specific for highly conserved regions of the nucleoprotein or acidic polymerase inhibits influenza A virus replication in vivo. Delivery of these siRNAs significantly reduced lung virus titers in infected mice and protected animals from lethal challenge. This protection was specific and not mediated by an antiviral IFN response. Moreover, influenza-specific siRNA treatment was broadly effective and protected animals against lethal challenge with highly pathogenic avian influenza A viruses of the H5 and H7 subtypes. These results indicate that RNA interference is promising for control of influenza virus infection, as well as other viral infections.

Jennifer Wu,  Narsimha Penthala,  S Jeong … (2011)
The antioxidant, anti-inflammatory, and cytotoxic activities of water and ethanol extracts of 14 Chinese medicinal plants were investigated and also their total phenolics and flavonoid contents measured. The antioxidant activity was evaluated in a biological assay using Saccharomyces cerevisiae , whereas the radical scavenging activity was measured using the 2,2-diphenyl-1-picrylhydrazyl (DPPH) method. Total phenolics and flavonoid contents were estimated by Folin-Ciocalteu and aluminum chloride methods, respectively. The anti-inflammatory activities of the plant extracts were determined by measuring the inhibition of production of nitric oxide (NO) and TNF-α in LPS and IFN-γ activated RAW 264.7 macrophages. Their cytotoxic activities against macrophages were determined by Alamar Blue assay. Four plants, namely, Scutellaria baicalensis , Taxillus chinensis , Rheum officinale , and Sophora japonica , showed significant antioxidant activity in both yeast model and also free radical scavenging methods. The ethanol extract of S. japonica showed highest levels of phenolics and flavonoids (91.33 GAE mg/g and 151.86 QE mg/g, respectively). A positive linear correlation between antioxidant activity and the total phenolics and flavonoid contents indicates that these compounds are likely to be the main antioxidants contributing to the observed activities. Five plant extracts (S. baicalensis, T. chinensis, S. japonica, Mahonia fortunei , and Sophora flavescens ) exhibited significant anti-inflammatory activity by in vitro inhibition of the production of NO and TNF-α with low IC(50) values. These findings suggest that some of the medicinal herbs studied in this paper are good sources of antioxidants.