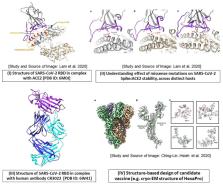 SARS-CoV-2 is the causative agent of COVID-19, the ongoing global pandemic. It has posed a worldwide challenge to human health as no effective treatment is currently available to combat the disease. Its severity has led to unprecedented collaborative initiatives for therapeutic solutions against COVID-19. Studies resorting to structure-based drug design for COVID-19 are plethoric and show good promise. Structural biology provides key insights into 3D structures, critical residues/mutations in SARS-CoV-2 proteins, implicated in infectivity, molecular recognition and susceptibility to a broad range of host species. The detailed understanding of viral proteins and their complexes with host receptors and candidate epitope/lead compounds is the key to developing a structure-guided therapeutic design.

Since the discovery of SARS-CoV-2, several structures of its proteins have been determined experimentally at an unprecedented speed and deposited in the Protein Data Bank. Further, specialized structural bioinformatics tools and resources have been developed for theoretical models, data on protein dynamics from computer simulations, impact of variants/mutations and molecular therapeutics.

Here, we provide an overview of ongoing efforts on developing structural bioinformatics tools and resources for COVID-19 research. We also discuss the impact of these resources and structure-based studies, to understand various aspects of SARS-CoV-2 infection and therapeutic development. These include (i) understanding differences between SARS-CoV-2 and SARS-CoV, leading to increased infectivity of SARS-CoV-2, (ii) deciphering key residues in the SARS-CoV-2 involved in receptor–antibody recognition, (iii) analysis of variants in host proteins that affect host susceptibility to infection and (iv) analyses facilitating structure-based drug and vaccine design against SARS-CoV-2.

Markus Hoffmann, Hannah Kleine-Weber, Simon Schroeder … (2020)
Summary The recent emergence of the novel, pathogenic SARS-coronavirus 2 (SARS-CoV-2) in China and its rapid national and international spread pose a global health emergency. Cell entry of coronaviruses depends on binding of the viral spike (S) proteins to cellular receptors and on S protein priming by host cell proteases. Unravelling which cellular factors are used by SARS-CoV-2 for entry might provide insights into viral transmission and reveal therapeutic targets. Here, we demonstrate that SARS-CoV-2 uses the SARS-CoV receptor ACE2 for entry and the serine protease TMPRSS2 for S protein priming. A TMPRSS2 inhibitor approved for clinical use blocked entry and might constitute a treatment option. Finally, we show that the sera from convalescent SARS patients cross-neutralized SARS-2-S-driven entry. Our results reveal important commonalities between SARS-CoV-2 and SARS-CoV infection and identify a potential target for antiviral intervention.

A new coronavirus associated with human respiratory disease in China

Fan Wu, Su Zhao, Bin Yu … (2020)
Emerging infectious diseases, such as severe acute respiratory syndrome (SARS) and Zika virus disease, present a major threat to public health 1–3 . Despite intense research efforts, how, when and where new diseases appear are still a source of considerable uncertainty. A severe respiratory disease was recently reported in Wuhan, Hubei province, China. As of 25 January 2020, at least 1,975 cases had been reported since the first patient was hospitalized on 12 December 2019. Epidemiological investigations have suggested that the outbreak was associated with a seafood market in Wuhan. Here we study a single patient who was a worker at the market and who was admitted to the Central Hospital of Wuhan on 26 December 2019 while experiencing a severe respiratory syndrome that included fever, dizziness and a cough. Metagenomic RNA sequencing 4 of a sample of bronchoalveolar lavage fluid from the patient identified a new RNA virus strain from the family Coronaviridae, which is designated here ‘WH-Human 1’ coronavirus (and has also been referred to as ‘2019-nCoV’). Phylogenetic analysis of the complete viral genome (29,903 nucleotides) revealed that the virus was most closely related (89.1% nucleotide similarity) to a group of SARS-like coronaviruses (genus Betacoronavirus, subgenus Sarbecovirus) that had previously been found in bats in China 5 . This outbreak highlights the ongoing ability of viral spill-over from animals to cause severe disease in humans.

Damian Szklarczyk, Annika Gable, David Lyon … (2018)
Abstract Proteins and their functional interactions form the backbone of the cellular machinery. Their connectivity network needs to be considered for the full understanding of biological phenomena, but the available information on protein–protein associations is incomplete and exhibits varying levels of annotation granularity and reliability. The STRING database aims to collect, score and integrate all publicly available sources of protein–protein interaction information, and to complement these with computational predictions. Its goal is to achieve a comprehensive and objective global network, including direct (physical) as well as indirect (functional) interactions. The latest version of STRING (11.0) more than doubles the number of organisms it covers, to 5090. The most important new feature is an option to upload entire, genome-wide datasets as input, allowing users to visualize subsets as interaction networks and to perform gene-set enrichment analysis on the entire input. For the enrichment analysis, STRING implements well-known classification systems such as Gene Ontology and KEGG, but also offers additional, new classification systems based on high-throughput text-mining as well as on a hierarchical clustering of the association network itself. The STRING resource is available online at https://string-db.org/.

Vaishali P. Waman and Neeladri Sen have contributed equally to this work.

This article is published and distributed under the terms of the Oxford University Press, Standard Journals Publication Model ( https://academic.oup.com/journals/pages/open_access/funder_policies/chorus/standard_publication_model)