Tinkering with the C-Function: A Molecular Frame for the Selection of Double Flowers in Cultivated Roses 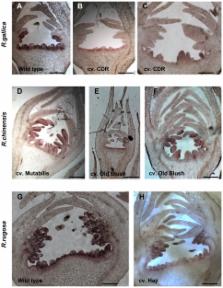 Roses have been cultivated for centuries and a number of varieties have been selected based on flower traits such as petal form, color, and number. Wild-type roses have five petals (simple flowers), whereas high numbers of petals (double flowers) are typical attributes of most of the cultivated roses. Here, we investigated the molecular mechanisms that could have been selected to control petal number in roses.

We demonstrate that a shift in RhAG expression domain boundary occurred in rose hybrids, causing double-flower phenotype. This molecular event was selected independently during rose domestication in Europe/Middle East and in China.

Hugh Smyth,  Vanessa C. Bowman,  Beth Meyerowitz (1988)
We describe the effects of four recessive homeotic mutations that specifically disrupt the development of flowers in Arabidopsis thaliana. Each of the recessive mutations affects the outcome of organ development, but not the location of organ primordia. Homeotic transformations observed are as follows. In agamous-1, stamens to petals; in apetala2-1, sepals to leaves and petals to staminoid petals; in apetala3-1, petals to sepals and stamens to carpels; in pistillata-1, petals to sepals. In addition, two of these mutations (ap2-1 and pi-1) result in loss of organs, and ag-1 causes the cells that would ordinarily form the gynoecium to differentiate as a flower. Two of the mutations are temperature-sensitive. Temperature shift experiments indicate that the wild-type AP2 gene product acts at the time of primordium initiation; the AP3 product is active later. It seems that the wild-type alleles of these four genes allow cells to determine their place in the developing flower and thus to differentiate appropriately. We propose that these genes may be involved in setting up or responding to concentric, overlapping fields within the flower primordium.

The limits of selection during maize domestication.

J Doebley,  L Lukens,  Anna Stec … (1999)
The domestication of all major crop plants occurred during a brief period in human history about 10,000 years ago. During this time, ancient agriculturalists selected seed of preferred forms and culled out seed of undesirable types to produce each subsequent generation. Consequently, favoured alleles at genes controlling traits of interest increased in frequency, ultimately reaching fixation. When selection is strong, domestication has the potential to drastically reduce genetic diversity in a crop. To understand the impact of selection during maize domestication, we examined nucleotide polymorphism in teosinte branched1, a gene involved in maize evolution. Here we show that the effects of selection were limited to the gene's regulatory region and cannot be detected in the protein-coding region. Although selection was apparently strong, high rates of recombination and a prolonged domestication period probably limited its effects. Our results help to explain why maize is such a variable crop. They also suggest that maize domestication required hundreds of years, and confirm previous evidence that maize was domesticated from Balsas teosinte of southwestern Mexico.

Publisher ID: 09-PONE-RA-14301R1
DOI: 10.1371/journal.pone.0009288
PMC ID: 2823793
PubMed ID: 20174587
Copyright statement: Dubois et al. This is an open-access article distributed under the terms of the Creative Commons Attribution License, which permits unrestricted use, distribution, and reproduction in any medium, provided the original author and source are credited.