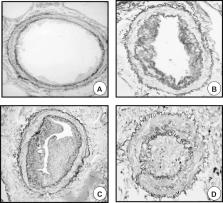 Pulmonary hypertension (PH) is a frequent and important complication of chronic obstructive pulmonary disease (COPD). It is associated with worse clinical courses with more frequent exacerbation episodes, shorter survival, and greater need of health resources. PH is usually of moderate severity and progresses slowly, without altering right ventricular function in the majority of cases. Nevertheless, a reduced subgroup of patients may present disproportionate PH, with pulmonary artery pressure (PAP) largely exceeding the severity of respiratory impairment. These patients may represent a group with an exaggerated vascular impairment (pulmonary vascular phenotype) to factors that induce PH in COPD or be patients in whom idiopathic pulmonary arterial hypertension (PAH) coexist. The present review addresses the current definition and classification of PH in COPD, the distinction among the different phenotypes of pulmonary vascular disease that might present in COPD patients, and the therapeutic approach to PH in COPD based on the available scientific evidence.

Pulmonary arterial pressure during rest and exercise in healthy subjects: a systematic review.

Gabor Kovacs,  S Scheidl,  H Olschewski … (2009)
According to current guidelines, pulmonary arterial hypertension (PAH) is diagnosed when mean pulmonary arterial pressure (Ppa) exceeds 25 mmHg at rest or 30 mmHg during exercise. Issues that remain unclear are the classification of Ppa values 30 mmHg during exercise is always pathological. We performed a comprehensive literature review and analysed all accessible data obtained by right heart catheter studies from healthy individuals to determine normal Ppa at rest and during exercise. Data on 1,187 individuals from 47 studies in 13 countries were included. Data were stratified for sex, age, geographical origin, body position and exercise level. Ppa at rest was 14.0+/-3.3 mmHg and this value was independent of sex and ethnicity. Resting Ppa was slightly influenced by posture (supine 14.0+/-3.3 mmHg, upright 13.6+/-3.1 mmHg) and age ( or = 50 yrs: 14.7+/-4.0 mmHg). Ppa during exercise was dependent on exercise level and age. During mild exercise, Ppa was 19.4+/-4.8 mmHg in subjects aged or = 50 yrs (p<0.001). In conclusion, while Ppa at rest is virtually independent of age and rarely exceeds 20 mmHg, exercise Ppa is age-related and frequently exceeds 30 mmHg, especially in elderly individuals, which makes it difficult to define normal Ppa values during exercise.

Characterization of pulmonary vascular remodelling in smokers and patients with mild COPD.

J. Ramirez Vargas,  Raquel González,  J Barberá … (2002)
Intimal enlargement of pulmonary arteries is an early change in chronic obstructive pulmonary disease (COPD). The cellular and extracellular components that are involved in this enlargement are unknown. The present study was designed to characterize the structural changes occurring in pulmonary muscular arteries in the initial disease stages. Lung specimens from patients with moderate COPD (n=8; forced expiratory volume in one second (FEV1), 66 +/- 10% predicted) and smokers without airflow obstruction (n=7; FEV1, 86 +/- 6% pred), were investigated by histochemistry to characterize extracellular matrix proteins and by immunohistochemistry to identify intrinsic cells of the vascular wall. In both COPD patients and smokers, the majority of cells present in the enlarged intimas were stained by specific smooth muscle cell (SMC) markers. No staining with endothelial or fibroblast markers was shown. A proportion of SMCs did not stain with desmin, suggesting cellular heterogeneity in this population. Elastin was the most abundant extracellular matrix protein and collagen was seen in a lower proportion. The amount of collagen was related to the intimal thickness (p<0.001). The findings demonstrated smooth muscle cell proliferation, as well as elastin and collagen deposition, in the thickened intimas of pulmonary arteries in moderate chronic obstructive pulmonary disease patients and smokers, suggesting that these abnormalities may originate at an early stage in cigarette smoke-induced respiratory disease.