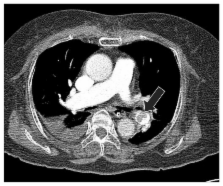 Publisher: The Korean Society of Anesthesiologists

Jean-Pierre Bassand,  Piotr Pruszczyk,  Arnaud Perrier … (2008)
Non-thrombotic PE does not represent a distinct clinical syndrome. It may be due to a variety of embolic materials and result in a wide spectrum of clinical presentations, making the diagnosis difficult. With the exception of severe air and fat embolism, the haemodynamic consequences of non-thrombotic emboli are usually mild. Treatment is mostly supportive but may differ according to the type of embolic material and clinical severity.

Samuel Z Goldhaber (2004)
Pulmonary embolism (PE) is a common illness that can cause death and disability. It is difficult to detect because patients present with a wide array of symptoms and signs. The clinical setting can raise suspicion, and certain inherited and acquired risk factors predispose susceptible individuals. D-dimer concentration in blood is the best laboratory screening test, and chest CT has become the most widespread imaging test. Treatment requires rapid and accurate risk stratification before haemodynamic decompensation and the development of cardiogenic shock. Anticoagulation is the foundation of therapy. Right-ventricular dysfunction on echocardiography and higher than normal concentrations of troponin identify high-risk patients who might need escalation of therapy with thrombolysis or embolectomy even if the blood pressure is normal on presentation. When patients are admitted to medical wards or when patients undergo surgery, their physicians should prescribe prophylactic measures to prevent PE. After hospital discharge, prophylaxis should continue for about a month for patients at high risk of thromboembolism.

This is an open-access article distributed under the terms of the Creative Commons Attribution Non-Commercial License (http://creativecommons.org/licenses/by-nc/3.0/), which permits unrestricted non-commercial use, distribution, and reproduction in any medium, provided the original work is properly cited.