The Role of Pitch and Timbre in Voice Gender Categorization 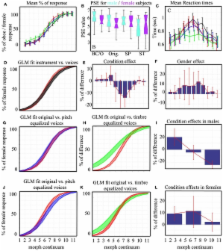 James Hillenbrand,  Laura Getty,  Michael Clark … (1995)
The purpose of this study was to replicate and extend the classic study of vowel acoustics by Peterson and Barney (PB) [J. Acoust. Soc. Am. 24, 175-184 (1952)]. Recordings were made of 45 men, 48 women, and 46 children producing the vowels /i,I,e, epsilon,ae,a, [symbol: see text],O,U,u, lambda,3 iota/ in h-V-d syllables. Formant contours for F1-F4 were measured from LPC spectra using a custom interactive editing tool. For comparison with the PB data, formant patterns were sampled at a time that was judged by visual inspection to be maximally steady. Analysis of the formant data shows numerous differences between the present data and those of PB, both in terms of average frequencies of F1 and F2, and the degree of overlap among adjacent vowels. As with the original study, listening tests showed that the signals were nearly always identified as the vowel intended by the talker. Discriminant analysis showed that the vowels were more poorly separated than the PB data based on a static sample of the formant pattern. However, the vowels can be separated with a high degree of accuracy if duration and spectral change information is included.

Catherine Bedard,  Pascal Belin,  Shirley Fecteau (2004)
The human voice is the carrier of speech, but also an "auditory face" that conveys important affective and identity information. Little is known about the neural bases of our abilities to perceive such paralinguistic information in voice. Results from recent neuroimaging studies suggest that the different types of vocal information could be processed in partially dissociated functional pathways, and support a neurocognitive model of voice perception largely similar to that proposed for face perception.