The macrophage: a therapeutic target in HIV-1 infection 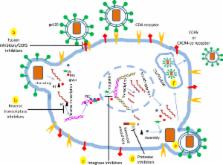 Human immunodeficiency virus (HIV) is still a serious global health concern responsible for more than 25 million deaths in last three decades. More than 34 million people are living with HIV infection. Macrophages and CD4+ T cells are the principal targets of HIV-1. The pathogenesis of HIV-1 takes different routes in macrophages and CD4+ T cells. Macrophages are resistant to the cytopathic effect of HIV-1 and produce virus for longer periods of time. In addition, macrophages being present in every organ system thus can disseminate virus to the different anatomical sites leading to the formation of viral sanctuaries. Complete cure of HIV-1 needs better understanding of viral pathogenesis in these reservoirs and implementation of knowledge into robust therapeutic products. In this review we will focus on the unique relationship between HIV-1 and macrophages. Furthermore, we will describe how successful antiretroviral therapy (ART) is in suppressing HIV and novel molecular and cellular strategies against HIV-1 in macrophages.

Isolation of a human gene that inhibits HIV-1 infection and is suppressed by the viral Vif protein.

J. Choi,  Nathan C. Gaddis,  Paul Sheehy … (2002)
Viruses have developed diverse non-immune strategies to counteract host-mediated mechanisms that confer resistance to infection. The Vif (virion infectivity factor) proteins are encoded by primate immunodeficiency viruses, most notably human immunodeficiency virus-1 (HIV-1). These proteins are potent regulators of virus infection and replication and are consequently essential for pathogenic infections in vivo. HIV-1 Vif seems to be required during the late stages of virus production for the suppression of an innate antiviral phenotype that resides in human T lymphocytes. Thus, in the absence of Vif, expression of this phenotype renders progeny virions non-infectious. Here, we describe a unique cellular gene, CEM15, whose transient or stable expression in cells that do not normally express CEM15 recreates this phenotype, but whose antiviral action is overcome by the presence of Vif. Because the Vif:CEM15 regulatory circuit is critical for HIV-1 replication, perturbing the circuit may be a promising target for future HIV/AIDS therapies.

Tetherin inhibits retrovirus release and is antagonized by HIV-1 Vpu.

Trinity Zang,  Stuart J D Neil,  Paul D. Bieniasz (2008)
Human cells possess an antiviral activity that inhibits the release of retrovirus particles, and other enveloped virus particles, and is antagonized by the HIV-1 accessory protein, Vpu. This antiviral activity can be constitutively expressed or induced by interferon-alpha, and it consists of protein-based tethers, which we term 'tetherins', that cause retention of fully formed virions on infected cell surfaces. Using deductive constraints and gene expression analyses, we identify CD317 (also called BST2 or HM1.24), a membrane protein of previously unknown function, as a tetherin. Specifically, CD317 expression correlated with, and induced, a requirement for Vpu during HIV-1 and murine leukaemia virus particle release. Furthermore, in cells where HIV-1 virion release requires Vpu expression, depletion of CD317 abolished this requirement. CD317 caused retention of virions on cell surfaces and, after endocytosis, in CD317-positive compartments. Vpu co-localized with CD317 and inhibited these effects. Inhibition of Vpu function and consequent mobilization of tetherin's antiviral activity is a potential therapeutic strategy in HIV/AIDS.