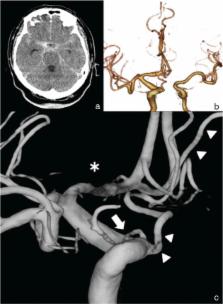 A 48-year-old man presented a subarachnoid hemorrhage caused by a rupture of a dissecting aneurysm at the proximal segment (A1 segment) of the right anterior cerebral artery (ACA). He also had an anomalous artery named infraoptic course ACA and an agenesis of the contralateral ACA A1 segment. Balloon occlusion test at the bifurcation of the right internal carotid artery demonstrated that the distal segments of the bilateral ACAs were perfused through the infraoptic course ACA. Therefore, we surgically trapped the A1 segment including the aneurysm. The patient got discharged without any neurological deficit. Natural course of ACA dissecting aneurysms is unclear because of rarity of the disease and treatment strategy is still controversial. Most of the dissecting aneurysms in the A1 segment are surgically treated, because they often present with massive hemorrhage and poor prognosis. In the present case, the contralateral A1 segment was absent but trapping of the dissecting aneurysm could be achieved without vascular reconstruction (e.g., bypass surgery) because of the presence of the infraoptic course ACA.

Neuroradiologic and clinical features of arterial dissection of the anterior cerebral artery.

T Kikkawa,  Hiroki Ohkuma,  Shigeharu Suzuki … (2003)
Case reports of nontraumatic arterial dissection of the anterior cerebral artery (ACA) have recently increased. The aim of this study was to investigate the neuroradiologic and clinical features of ACA dissection based on a series of collected cases. The cases of 18 patients with a diagnosis of ACA dissection based on clinical signs and neuroradiologic findings from 46 stroke centers during a 5-year period were collected. The neuroradiologic and clinical records were analyzed. The mean patient age was 52.8 +/- 9.8 years. Five cases presented with subarachnoid hemorrhage, nine with cerebral ischemia, and four with both ischemic symptoms and subarachnoid hemorrhage. In cases presenting with ischemia, the main site of the lesion was the A2 portion and the main angiographic finding was stenosis with or without dilation. Follow-up angiography showed progression of the stenosis in the acute stage and resolution of the stenosis in the chronic stage. Hyperintensity around the flow void due to intramural hematoma on T1-weighted MR images was often seen during the second week. In all cases, the findings of MR angiography corresponded to the findings of cerebral angiography. Eight of nine cases showed a good prognosis. In three of the patients with bleeding, in whom the site of the lesion was at the A1 portion, a diffuse thick subarachnoid hemorrhage was present and surgical treatment was required but resulted in a poor prognosis. In the other patients with bleeding, in whom the site of the lesion was at the distal ACA, the prognosis was good and no rebleeding or need for surgical treatment occurred. ACA dissection presenting with ischemia has several identifiable neuroradiologic and clinical characteristics, which suggests that it may be classified as a unique clinical entity.

This work is licensed under a Creative Commons Attribution-NonCommercial-NoDerivatives 4.0 International License. To view a copy of this license, visit http://creativecommons.org/licenses/by-nc-nd/4.0/