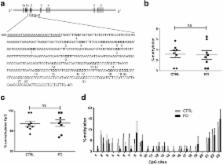 Alpha-synuclein sequesters Dnmt1 from the nucleus: a novel mechanism for epigenetic alterations in Lewy body diseases.

Sarah Michael,  Brian Spencer,  Eliezer Masliah … (2011)
DNA methylation is a major epigenetic modification that regulates gene expression. Dnmt1, the maintenance DNA methylation enzyme, is abundantly expressed in the adult brain and is mainly located in the nuclear compartment, where it has access to chromatin. Hypomethylation of CpG islands at intron 1 of the SNCA gene has recently been reported to result in overexpression of α-synuclein in Parkinson disease (PD) and related disorders. We therefore investigated the mechanisms underlying altered DNA methylation in PD and dementia with Lewy bodies (DLB). We present evidence of reduction of nuclear Dnmt1 levels in human postmortem brain samples from PD and DLB patients as well as in the brains of α-synuclein transgenic mice models. Furthermore, sequestration of Dnmt1 in the cytoplasm results in global DNA hypomethylation in human and mouse brains, involving CpG islands upstream of SNCA, SEPW1, and PRKAR2A genes. We report that association of Dnmt1 and α-synuclein might mediate aberrant subcellular localization of Dnmt1. Nuclear Dnmt1 levels were partially rescued by overexpression of Dnmt1 in neuronal cell cultures and in α-synuclein transgenic mice brains. Our results underscore a novel mechanism for epigenetic dysregulation in Lewy body diseases, which might underlie the decrease in DNA methylation reported for PD and DLB.

Lumine Matsumoto,  Hiroshi Takuma,  Akira Tamaoka … (2010)
Background Alpha-synuclein (SNCA) gene expression is an important factor in the pathogenesis of Parkinson's disease (PD). Gene multiplication can cause inherited PD, and promoter polymorphisms that increase SNCA expression are associated with sporadic PD. CpG methylation in the promoter region may also influence SNCA expression. Methodology/Principal Findings By using cultured cells, we identified a region of the SNCA CpG island in which the methylation status altered along with increased SNCA expression. Postmortem brain analysis revealed regional non-specific methylation differences in this CpG region in the anterior cingulate and putamen among controls and PD; however, in the substantia nigra of PD, methylation was significantly decreased. Conclusions/Significance This CpG region may function as an intronic regulatory element for SNCA gene. Our findings suggest that a novel epigenetic regulatory mechanism controlling SNCA expression influences PD pathogenesis.