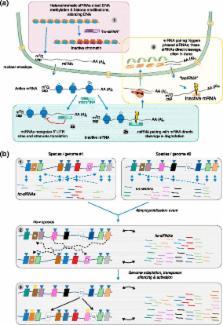 We have witnessed an explosion in our understanding of the evolution and structure of plant genomes in recent years. Here, we highlight three important emergent realizations: (1) that the evolutionary history of all plant genomes contains multiple, cyclical episodes of whole-genome doubling that were followed by myriad fractionation processes; (2) that the vast majority of the variation in genome size reflects the dynamics of proliferation and loss of lineage-specific transposable elements; and (3) that various classes of small RNAs help shape genomic architecture and function. We illustrate ways in which understanding these organism-level and molecular genetic processes can be used for crop plant improvement.

Genome sequence of the palaeopolyploid soybean.

M Bhattacharyya,  Myron Peto,  Perry B Cregan … (2010)
Soybean (Glycine max) is one of the most important crop plants for seed protein and oil content, and for its capacity to fix atmospheric nitrogen through symbioses with soil-borne microorganisms. We sequenced the 1.1-gigabase genome by a whole-genome shotgun approach and integrated it with physical and high-density genetic maps to create a chromosome-scale draft sequence assembly. We predict 46,430 protein-coding genes, 70% more than Arabidopsis and similar to the poplar genome which, like soybean, is an ancient polyploid (palaeopolyploid). About 78% of the predicted genes occur in chromosome ends, which comprise less than one-half of the genome but account for nearly all of the genetic recombination. Genome duplications occurred at approximately 59 and 13 million years ago, resulting in a highly duplicated genome with nearly 75% of the genes present in multiple copies. The two duplication events were followed by gene diversification and loss, and numerous chromosome rearrangements. An accurate soybean genome sequence will facilitate the identification of the genetic basis of many soybean traits, and accelerate the creation of improved soybean varieties.

R Holt,  Betsy Kohler,  S Difazio … (2006)
We report the draft genome of the black cottonwood tree, Populus trichocarpa. Integration of shotgun sequence assembly with genetic mapping enabled chromosome-scale reconstruction of the genome. More than 45,000 putative protein-coding genes were identified. Analysis of the assembled genome revealed a whole-genome duplication event; about 8000 pairs of duplicated genes from that event survived in the Populus genome. A second, older duplication event is indistinguishably coincident with the divergence of the Populus and Arabidopsis lineages. Nucleotide substitution, tandem gene duplication, and gross chromosomal rearrangement appear to proceed substantially more slowly in Populus than in Arabidopsis. Populus has more protein-coding genes than Arabidopsis, ranging on average from 1.4 to 1.6 putative Populus homologs for each Arabidopsis gene. However, the relative frequency of protein domains in the two genomes is similar. Overrepresented exceptions in Populus include genes associated with lignocellulosic wall biosynthesis, meristem development, disease resistance, and metabolite transport.

The B73 maize genome: complexity, diversity, and dynamics.

Amy Reily,  Jeffrey Bennetzen,  Barbara J. Gillam … (2010)
We report an improved draft nucleotide sequence of the 2.3-gigabase genome of maize, an important crop plant and model for biological research. Over 32,000 genes were predicted, of which 99.8% were placed on reference chromosomes. Nearly 85% of the genome is composed of hundreds of families of transposable elements, dispersed nonuniformly across the genome. These were responsible for the capture and amplification of numerous gene fragments and affect the composition, sizes, and positions of centromeres. We also report on the correlation of methylation-poor regions with Mu transposon insertions and recombination, and copy number variants with insertions and/or deletions, as well as how uneven gene losses between duplicated regions were involved in returning an ancient allotetraploid to a genetically diploid state. These analyses inform and set the stage for further investigations to improve our understanding of the domestication and agricultural improvements of maize.