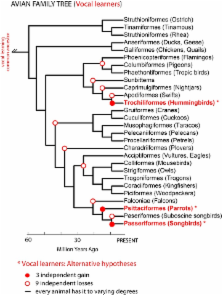 Vocal learners such as humans and songbirds can learn to produce elaborate patterns of structurally organized vocalizations, whereas many other vertebrates such as non-human primates and most other bird groups either cannot or do so to a very limited degree. To explain the similarities among humans and vocal-learning birds and the differences with other species, various theories have been proposed. One set of theories are motor theories, which underscore the role of the motor system as an evolutionary substrate for vocal production learning. For instance, the motor theory of speech and song perception proposes enhanced auditory perceptual learning of speech in humans and song in birds, which suggests a considerable level of neurobiological specialization. Another, a motor theory of vocal learning origin, proposes that the brain pathways that control the learning and production of song and speech were derived from adjacent motor brain pathways. Another set of theories are cognitive theories, which address the interface between cognition and the auditory-vocal domains to support language learning in humans. Here we critically review the behavioral and neurobiological evidence for parallels and differences between the so-called vocal learners and vocal non-learners in the context of motor and cognitive theories. In doing so, we note that behaviorally vocal-production learning abilities are more distributed than categorical, as are the auditory-learning abilities of animals. We propose testable hypotheses on the extent of the specializations and cross-species correspondences suggested by motor and cognitive theories. We believe that determining how spoken language evolved is likely to become clearer with concerted efforts in testing comparative data from many non-human animal species.

Repetition and the brain: neural models of stimulus-specific effects.

Kalanit Grill-Spector, Richard Henson, Alex Martin (2006)
One of the most robust experience-related cortical dynamics is reduced neural activity when stimuli are repeated. This reduction has been linked to performance improvements due to repetition and also used to probe functional characteristics of neural populations. However, the underlying neural mechanisms are as yet unknown. Here, we consider three models that have been proposed to account for repetition-related reductions in neural activity, and evaluate them in terms of their ability to account for the main properties of this phenomenon as measured with single-cell recordings and neuroimaging techniques. We also discuss future directions for distinguishing between these models, which will be important for understanding the neural consequences of repetition and for interpreting repetition-related effects in neuroimaging data.

J. R. Saffran, R. Aslin, E. Newport (1996)
Learners rely on a combination of experience-independent and experience-dependent mechanisms to extract information from the environment. Language acquisition involves both types of mechanisms, but most theorists emphasize the relative importance of experience-independent mechanisms. The present study shows that a fundamental task of language acquisition, segmentation of words from fluent speech, can be accomplished by 8-month-old infants based solely on the statistical relationships between neighboring speech sounds. Moreover, this word segmentation was based on statistical learning from only 2 minutes of exposure, suggesting that infants have access to a powerful mechanism for the computation of statistical properties of the language input.

Statistical learning of tone sequences by human infants and adults.