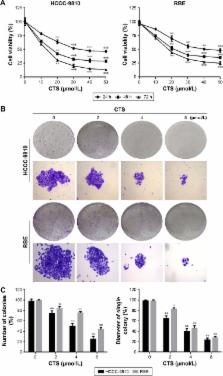 Cholangiocarcinoma (CCA) is the most common biliary tract malignancy in the world with high resistance to current chemotherapies and extremely poor prognosis. The main objective of this study was to investigate the inhibitory effects of cryptotanshinone (CTS), a natural compound isolated from Salvia miltiorrhiza Bunge, on CCA both in vitro and in vivo and to explore the underlying mechanisms of CTS-induced apoptosis and cell cycle arrest.

The anti-tumor activity of CTS on HCCC-9810 and RBE cells was assessed by 3-(4,5-dimethylthiazol-2-yl)-2,5-diphenyl-tetrazolium bromide (MTT) assay and colony forming assays. Cell cycle changes were detected by flow cytometric analysis. Apoptosis was detected by annexin V/propidium iodide double staining and Hoechst 33342 staining assays. The efficacy of CTS in vivo was evaluated using a HCCC-9810 xenograft model in athymic nude mice. The expression of key proteins involved in cell apoptosis and signaling pathway in vitro was analyzed by Western blot analysis.

CTS induced potent growth inhibition, S-phase arrest, apoptosis, and colony-forming inhibition in HCCC-9810 and RBE cells in a dose-dependent manner. Intraperitoneal injection of CTS (0, 10, or 25 mg/kg) for 4 weeks significantly inhibited the growth of HCCC-9810 xenografts in athymic nude mice. CTS treatment induced S-phase arrest with a decrease of cyclin A1 and an increase of cyclin D1 protein level. Bcl-2 expression was downregulated remarkably, while Bax expression was increased after apoptosis occurred. Additionally, the activation of JAK2/STAT3 and PI3K/Akt/NFκB was significantly inhibited in CTS-treated CCA cells.

CTS induced CCA cell apoptosis by suppressing both the JAK2/STAT3 and PI3K/Akt/NFκB signaling pathways and altering the expression of Bcl-2/Bax family, which was regulated by these two signaling pathways. CTS may serve as a potential therapeutic agent for CCA.

Shahid Khan,  Howard C Thomas,  Brian Davidson … (2005)
Cholangiocarcinoma is a devastating malignancy that presents late, is notoriously difficult to diagnose, and is associated with a high mortality. The incidence of intrahepatic cholangiocarcinoma is increasing worldwide. The cause for this rise is unclear, although it could be related to an interplay between predisposing genetic factors and environmental triggers. MRI and CT with endoscopic ultrasound and PET provide useful diagnostic information in certain patients. Surgical resection is the only chance for cure, with results depending on careful technique and patient selection. Data suggest that liver transplantation could offer long-term survival in selected patients when combined with neoadjuvant chemoradiotherapy. Chemotherapy and radiotherapy have been ineffective for patients with inoperable tumours. For most of these patients biliary drainage is the mainstay of palliation. However, controversy exists over the type and positioning of biliary stents. Photodynamic treatment is a new palliative technique that might improve quality of life.

Tom Cross,  Joanna Bloom (2007)
Cyclins regulate the cell cycle by binding to and activating cyclin-dependent kinases (Cdks). Phosphorylation of specific targets by cyclin-Cdk complexes sets in motion different processes that drive the cell cycle in a timely manner. In budding yeast, a single Cdk is activated by multiple cyclins. The ability of these cyclins to target specific proteins and to initiate different cell-cycle events might, in some cases, reflect the timing of the expression of the cyclins; in others, it might reflect intrinsic properties of the cyclins that render them better suited to target particular proteins.