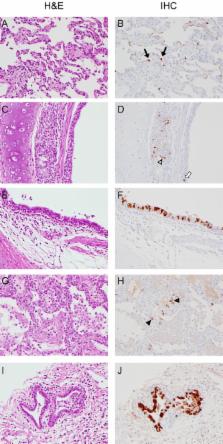 In March 2013, three fatal human cases of infection with influenza A virus (H7N9) were reported in China. Since then, human cases have been accumulating. Given the public health importance of this virus, we performed a pathogenicity study of the H7N9 virus in the cynomolgus macaque model, focusing on clinical aspects of disease, radiographic, histological, and gene expression profile changes in the upper and lower respiratory tracts, and changes in systemic cytokine and chemokine profiles during infection. Cynomolgus macaques developed transient, mild to severe disease with radiographic evidence of pulmonary infiltration. Virus replicated in the upper as well as lower respiratory tract, with sustained replication in the upper respiratory tract until the end of the experiment at 6 days after inoculation. Virus shedding occurred mainly via the throat. Histopathological changes in the lungs were similar to those observed in humans, albeit less severe, with diffuse alveolar damage, infiltration of polymorphonuclear cells, formation of hyaline membranes, pneumocyte hyperplasia, and fibroproliferative changes. Analysis of gene expression profiles in lung lesions identified pathways involved in tissue damage during H7N9 infection as well as leads for development of therapeutics targeting host responses rather than virus replication. Overall, H7N9 infection was not as severe in cynomolgus macaques as in humans, supporting the possible role of underlying medical complications in disease severity as discussed for human H7N9 infection (H. N. Gao et al., N. Engl. J. Med. 368:2277–2285, 2013, doi:10.1056/NEJMoa1305584).

Influenza A virus H7N9 emerged early in 2013, and human cases have continued to emerge since then. Although H7N9 virus-induced disease in humans is often very severe and even lethal, the majority of reported H7N9 cases occurred in older people and people with underlying medical conditions. To better understand the pathogenicity of this virus, healthy cynomolgus macaques were inoculated with influenza A virus H7N9. Cynomolgus macaques were used as a model because the receptor distribution for H7N9 virus in macaques was recently shown to be more similar to that in humans than that of other frequently used animal models. From comparison with previous studies, we conclude that the emerging H7N9 influenza virus was more pathogenic in cynomolgus macaques than seasonal influenza A viruses and most isolates of the pandemic H1N1 virus but less pathogenic than the 1918 Spanish influenza virus or highly pathogenic avian influenza (HPAI) H5N1 virus.

Human Infection with a Novel Avian-Origin Influenza A (H7N9) Virus

Rongbao Gao,  Bin Cao,  Yunwen Hu … (2013)
Infection of poultry with influenza A subtype H7 viruses occurs worldwide, but the introduction of this subtype to humans in Asia has not been observed previously. In March 2013, three urban residents of Shanghai or Anhui, China, presented with rapidly progressing lower respiratory tract infections and were found to be infected with a novel reassortant avian-origin influenza A (H7N9) virus. We obtained and analyzed clinical, epidemiologic, and virologic data from these patients. Respiratory specimens were tested for influenza and other respiratory viruses by means of real-time reverse-transcriptase-polymerase-chain-reaction assays, viral culturing, and sequence analyses. A novel reassortant avian-origin influenza A (H7N9) virus was isolated from respiratory specimens obtained from all three patients and was identified as H7N9. Sequencing analyses revealed that all the genes from these three viruses were of avian origin, with six internal genes from avian influenza A (H9N2) viruses. Substitution Q226L (H3 numbering) at the 210-loop in the hemagglutinin (HA) gene was found in the A/Anhui/1/2013 and A/Shanghai/2/2013 virus but not in the A/Shanghai/1/2013 virus. A T160A mutation was identified at the 150-loop in the HA gene of all three viruses. A deletion of five amino acids in the neuraminidase (NA) stalk region was found in all three viruses. All three patients presented with fever, cough, and dyspnea. Two of the patients had a history of recent exposure to poultry. Chest radiography revealed diffuse opacities and consolidation. Complications included acute respiratory distress syndrome and multiorgan failure. All three patients died. Novel reassortant H7N9 viruses were associated with severe and fatal respiratory disease in three patients. (Funded by the National Basic Research Program of China and others.).

Clinical findings in 111 cases of influenza A (H7N9) virus infection.

Zhan Gao,  Nan Zhong,  Qiang Fang … (2013)
During the spring of 2013, a novel avian-origin influenza A (H7N9) virus emerged and spread among humans in China. Data were lacking on the clinical characteristics of the infections caused by this virus. Using medical charts, we collected data on 111 patients with laboratory-confirmed avian-origin influenza A (H7N9) infection through May 10, 2013. Of the 111 patients we studied, 76.6% were admitted to an intensive care unit (ICU), and 27.0% died. The median age was 61 years, and 42.3% were 65 years of age or older; 31.5% were female. A total of 61.3% of the patients had at least one underlying medical condition. Fever and cough were the most common presenting symptoms. On admission, 108 patients (97.3%) had findings consistent with pneumonia. Bilateral ground-glass opacities and consolidation were the typical radiologic findings. Lymphocytopenia was observed in 88.3% of patients, and thrombocytopenia in 73.0%. Treatment with antiviral drugs was initiated in 108 patients (97.3%) at a median of 7 days after the onset of illness. The median times from the onset of illness and from the initiation of antiviral therapy to a negative viral test result on real-time reverse-transcriptase-polymerase-chain-reaction assay were 11 days (interquartile range, 9 to 16) and 6 days (interquartile range, 4 to 7), respectively. Multivariate analysis revealed that the presence of a coexisting medical condition was the only independent risk factor for the acute respiratory distress syndrome (ARDS) (odds ratio, 3.42; 95% confidence interval, 1.21 to 9.70; P=0.02). During the evaluation period, the novel H7N9 virus caused severe illness, including pneumonia and ARDS, with high rates of ICU admission and death. (Funded by the National Natural Science Foundation of China and others.).