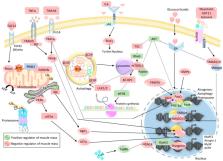 The loss of skeletal muscle mass under a wide range of acute and chronic maladies is associated with poor prognosis, reduced quality of life, and increased mortality. Decades of research indicate the importance of skeletal muscle for whole body metabolism, glucose homeostasis, as well as overall health and wellbeing. This tissue’s remarkable ability to rapidly and effectively adapt to changing environmental cues is a double-edged sword. Physiological adaptations that are beneficial throughout life become maladaptive during atrophic conditions. The atrophic program can be activated by mechanical, oxidative, and energetic distress, and is influenced by the availability of nutrients, growth factors, and cytokines. Largely governed by a transcription-dependent mechanism, this program impinges on multiple protein networks including various organelles as well as biosynthetic and quality control systems. Although modulating muscle function to prevent and treat disease is an enticing concept that has intrigued research teams for decades, a lack of thorough understanding of the molecular mechanisms and signaling pathways that control muscle mass, in addition to poor transferability of findings from rodents to humans, has obstructed efforts to develop effective treatments. Here, we review the progress made in unraveling the molecular mechanisms responsible for the regulation of muscle mass, as this continues to be an intensive area of research.

Autophagy is activated for cell survival after endoplasmic reticulum stress.

Maiko OGATA, Shin-ichiro Hino, Atsushi Saito … (2006)
Eukaryotic cells deal with accumulation of unfolded proteins in the endoplasmic reticulum (ER) by the unfolded protein response, involving the induction of molecular chaperones, translational attenuation, and ER-associated degradation, to prevent cell death. Here, we found that the autophagy system is activated as a novel signaling pathway in response to ER stress. Treatment of SK-N-SH neuroblastoma cells with ER stressors markedly induced the formation of autophagosomes, which were recognized at the ultrastructural level. The formation of green fluorescent protein (GFP)-LC3-labeled structures (GFP-LC3 "dots"), representing autophagosomes, was extensively induced in cells exposed to ER stress with conversion from LC3-I to LC3-II. In IRE1-deficient cells or cells treated with c-Jun N-terminal kinase (JNK) inhibitor, the autophagy induced by ER stress was inhibited, indicating that the IRE1-JNK pathway is required for autophagy activation after ER stress. In contrast, PERK-deficient cells and ATF6 knockdown cells showed that autophagy was induced after ER stress in a manner similar to the wild-type cells. Disturbance of autophagy rendered cells vulnerable to ER stress, suggesting that autophagy plays important roles in cell survival after ER stress.

Laura García-Prat, Marta Martinez-Vicente, Eusebio Perdiguero … (2016)
During ageing, muscle stem-cell regenerative function declines. At advanced geriatric age, this decline is maximal owing to transition from a normal quiescence into an irreversible senescence state. How satellite cells maintain quiescence and avoid senescence until advanced age remains unknown. Here we report that basal autophagy is essential to maintain the stem-cell quiescent state in mice. Failure of autophagy in physiologically aged satellite cells or genetic impairment of autophagy in young cells causes entry into senescence by loss of proteostasis, increased mitochondrial dysfunction and oxidative stress, resulting in a decline in the function and number of satellite cells. Re-establishment of autophagy reverses senescence and restores regenerative functions in geriatric satellite cells. As autophagy also declines in human geriatric satellite cells, our findings reveal autophagy to be a decisive stem-cell-fate regulator, with implications for fostering muscle regeneration in sarcopenia.

A role for ubiquitin in selective autophagy.

Vladimir Kirkin, David G McEwan, Ivana Novak … (2009)
Ubiquitination is the hallmark of protein degradation by the 26S proteasome. However, the proteasome is limited in its capacity to degrade oligomeric and aggregated proteins. Removal of harmful protein aggregates is mediated by autophagy, a mechanism by which the cell sequesters cytosolic cargo and delivers it for degradation by the lysosome. Identification of autophagy receptors, such as p62/SQSTM1 and NBR1, which simultaneously bind both ubiquitin and autophagy-specific ubiquitin-like modifiers, LC3/GABARAP, has provided a molecular link between ubiquitination and autophagy. This review explores the hypothesis that ubiquitin represents a selective degradation signal suitable for targeting various types of cargo, ranging from protein aggregates to membrane-bound organelles and microbes.