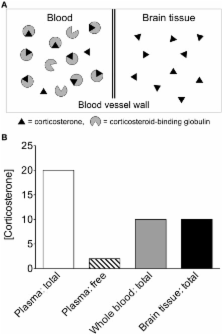 It is well recognized that steroids are synthesized de novo in the brain (neurosteroids). In addition, steroids circulating in the blood enter the brain. Steroids play numerous roles in the brain, such as influencing neural development, adult neuroplasticity, behavior, neuroinflammation, and neurodegenerative diseases such as Alzheimer’s disease. In order to understand the regulation and functions of steroids in the brain, it is important to directly measure steroid concentrations in brain tissue. In this brief review, we discuss methods for the detection and quantification of steroids in the brain. We concisely present the major advantages and disadvantages of different technical approaches at various experimental stages: euthanasia, tissue collection, steroid extraction, steroid separation, and steroid measurement. We discuss, among other topics, the potential effects of anesthesia and saline perfusion prior to tissue collection; microdissection via Palkovits punch; solid phase extraction; chromatographic separation of steroids; and immunoassays and mass spectrometry for steroid quantification, particularly the use of mass spectrometry for “steroid profiling.” Finally, we discuss the interpretation of local steroid concentrations, such as comparing steroid levels in brain tissue with those in the circulation (plasma vs. whole blood samples; total vs. free steroid levels). We also present reference values for a variety of steroids in different brain regions of adult rats. This brief review highlights some of the major methodological considerations at multiple experimental stages and provides a broad framework for designing studies that examine local steroid levels in the brain as well as other steroidogenic tissues, such as thymus, breast, and prostate.

The determination of five steroids in avian plasma by radioimmunoassay and competitive protein-binding.

J.C. Wingfield, Donald S. Farner (1975)
A method has been developed for the simultaneous determination of testosterone, 5alpha-dihydrotestosterone and corticosterone, or of estrone, estradiol-17beta and corticosterone, after separation on a Celite:propylene glycol:ethylene glycol column (6:1.5:1.5 w/v/v). The lower quarter of the column was packed with a Celite: water mixture (3:1 w/v) as a stationary phase (glycol) 'trap'. This effectively prevented leaching of the glycols into the eluate as the concentration of ethyl acetate in the mobile phase was increased to elute the more polar steroids. In addition, a second system utilizing a Celite: ethylene glycol column (2:1 w/v) for the separation of estrone and estradiol-17beta is described. Testosterone, 5alpha-dihydrotestosterone, estrone and estradiol-17beta were measured by radioimmunoassay and corticosterone by a competitive protein-binding technique. Reliability criteria are presented showing that the assay systems used are accurate and reproducible. Plasma-steroid levels of eight avian species are also presented and compared with those found by other investigators.

Y Hojo, T.-a. Hattori, T Enami … (2004)
In adult mammalian brain, occurrence of the synthesis of estradiol from endogenous cholesterol has been doubted because of the inability to detect dehydroepiandrosterone synthase, P45017alpha. In adult male rat hippocampal formation, significant localization was demonstrated for both cytochromes P45017alpha and P450 aromatase, in pyramidal neurons in the CA1-CA3 regions, as well as in the granule cells in the dentate gyrus, by means of immunohistochemical staining of slices. Only a weak immunoreaction of these P450s was observed in astrocytes and oligodendrocytes. ImmunoGold electron microscopy revealed that P45017alpha and P450 aromatase were localized in pre- and postsynaptic compartments as well as in the endoplasmic reticulum in principal neurons. The expression of these cytochromes was further verified by using Western blot analysis and RT-PCR. Stimulation of hippocampal neurons with N-methyl-d-aspartate induced a significant net production of estradiol. Analysis of radioactive metabolites demonstrated the conversion from [(3)H]pregnenolone to [(3)H]estradiol through dehydroepiandrosterone and testosterone. This activity was abolished by the application of specific inhibitors of cytochrome P450s. Interestingly, estradiol was not significantly converted to other steroid metabolites. Taken together with our previous finding of a P450scc-containing neuronal system for pregnenolone synthesis, these results imply that 17beta-estradiol is synthesized by P45017alpha and P450 aromatase localized in hippocampal neurons from endogenous cholesterol. This synthesis may be regulated by a glutamate-mediated synaptic communication that evokes Ca(2+) signals.

Neurosteroids: biosynthesis and function of these novel neuromodulators.

Nathalie Compagnone, V Mellon (1999)
Over the past decade, it has become clear that the brain is a steroidogenic organ. The steroids synthesized by the brain and nervous system, given the name neurosteroids, have a wide variety of diverse functions. In general, they mediate their actions, not through classic steroid hormone nuclear receptors, but through ion-gated neurotransmitter receptors. This paper summarizes what is known about the biosynthesis of neurosteroids, the enzymes mediating these reactions, their localization during development and in the adult, and their function and mechanisms of action in the developing and adult central and peripheral nervous systems. The expression of the steroidogenic enzymes is developmentally regulated, with some enzymes being expressed only during development, while others are expressed during development and in the adult. These enzymes are expressed in both neurons and glia, suggesting that these two cell types must work in concert to produce the appropriate active neurosteroid. The functions attributed to specific neurosteroids include modulation of GABA(A) and NMDA function, modulation of sigma receptor function, regulation of myelinization, neuroprotection, and growth of axons and dendrites. Neurosteroids have also been shown to modulate expression of particular subunits of GABA(A) and NMDA receptors, providing additional sites at which these compounds can regulate neural function. The pharmacological properties of specific neurosteroids are described, and potential uses of neurosteroids in specific neuropathologies and during normal aging in humans are also discussed. Copyright 2000 Academic Press.

This article was submitted to Frontiers in Neuroendocrine Science, a specialty of Frontiers in Endocrinology.