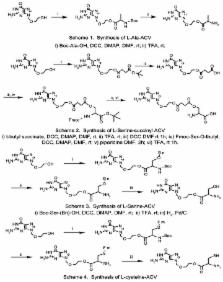 The aim of this study was to characterize the affinity and permeability patterns of the amino acid ester prodrugs of acyclovir (ACV), L-alanine-ACV (AACV), L-serine-ACV (SACV), L-serine-succinate-ACV (SSACV) and L-cysteine-ACV (CACV) on rabbit primary corneal epithelial cell culture (rPCEC) and on rabbit cornea. Amino acid prodrugs of acyclovir, AACV, SACV, SSACV and CACV were synthesized in our laboratory. Chemical hydrolysis in aqueous buffer, enzymatic hydrolysis in corneal homogenates and transport across freshly excised rabbit cornea of these prodrugs were studied. SSACV inhibited the uptake of [ 3H] L-alanine on rPCEC and across the intact rabbit cornea. Lineweaver-Burk plot transformation revealed competitive inhibition between L-alanine and SSACV. In corneal tissue homogenate, the half lives of SSACV, SACV and CACV (t 1/2) were observed to be 3.5 ± 0.4, 9.2 ± 0.6 and 1.8 ± 0.1 hr respectively, whereas AACV was readily converted to the active parent drug acyclovir exhibiting complete degradation before 5 min. Interestingly translocation of SACV across cornea was inhibited in the presence of 5 mM arginine (~51%), a specific substrate for cationic transport system and in presence of BCH (~38%), a substrate specific for large neutral amino acid transport system (LAT) or cationic and neutral amino acid transport system (B 0,+). SACV exhibited higher permeability across cornea along with excellent antiviral activity against herpes simplex virus (HSV-1) and varicella-zoster virus (VZV) in comparison to ACV. Recognition by multiple transporters, stability in corneal homogenate and changes in physico-chemical properties contributed to the increased permeability of SACV across cornea.

Role of amino acid transport and countertransport in nutrition and metabolism.

Transport of amino acid-based prodrugs by the Na+- and Cl(-) -coupled amino acid transporter ATB0,+ and expression of the transporter in tissues amenable for drug delivery.

Masayuki Haramura,  William C. Bridges,  Vadivel Ganapathy … (2004)
We evaluated the potential of the Na(+)- and Cl(-)-coupled amino acid transporter ATB(0,+) as a delivery system for amino acid-based prodrugs. Immunofluorescence analysis indicated that ATB(0,+) is expressed abundantly on the luminal surface of cells lining the lumen of the large intestine and the airways of the lung and in various ocular tissues, including the conjunctival epithelium, the tissues easily amenable for drug delivery. We screened a variety of beta-carboxyl derivatives of aspartate and gamma-carboxyl derivatives of glutamate as potential substrates for this transporter using heterologous expression systems. In mammalian cells expressing the cloned ATB(0,+), several of the aspartate and glutamate derivatives inhibited glycine transport via ATB(0,+). Direct evidence for ATB(0,+)-mediated transport of these derivatives was obtained in Xenopus laevis oocytes using electrophysiological methods. Exposure of oocytes, which express ATB(0,+) heterologously, to aspartate beta-benzyl ester as a model derivative induced inward currents in a Na(+)- and Cl(-)-dependent manner with a Na(+)/Cl(-)/aspartate beta-benzyl ester stoichiometry of 2:1:1. ATB(0,+) transported not only the beta-carboxyl derivatives of aspartate and the gamma-carboxyl derivatives of glutamate but also valacyclovir, which is an alpha-carboxyl ester of acyclovir with valine. The transport of valacyclovir via ATB(0,+) was demonstrable in both heterologous expression systems. This process was dependent on Na(+) and Cl(-). The ability of ATB(0,+) to transport valacyclovir was comparable with that of the peptide transporter PEPT1. These findings suggest that ATB(0,+) has significant potential as a delivery system for amino acid-based drugs and prodrugs.

Cloning and expression of a human neutral amino acid transporter with structural similarity to the glutamate transporter gene family.

S G Amara,  Y. Wu,  J Arriza … (1993)
A cDNA was isolated from human brain that encodes an amino acid sequence 34-39% identical to previously published glutamate transporter sequences. Injection of RNA transcribed from this cDNA into Xenopus oocytes resulted in expression of a transport activity with the properties of the neutral amino acid uptake system ASC. Superfusion of alanine, serine, and cysteine evoked sodium-dependent inward currents in voltage-clamped oocytes expressing the transporter. These currents were dose-dependent, stereospecific, and saturable, with Km values ranging from 29 to 88 microM. Northern blot analyses revealed ubiquitous expression of this gene, termed ASCT1, consistent with the general metabolic role ascribed to system ASC.

This is an open access article. Unrestricted non-commercial use is permitted provided the original work is properly cited.