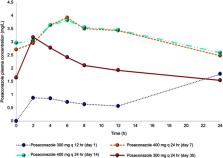 H Ashbee,  Rosemary A. Barnes,  Elizabeth Johnson … (2014)
The burden of human disease related to medically important fungal pathogens is substantial. An improved understanding of antifungal pharmacology and antifungal pharmacokinetics-pharmacodynamics has resulted in therapeutic drug monitoring (TDM) becoming a valuable adjunct to the routine administration of some antifungal agents. TDM may increase the probability of a successful outcome, prevent drug-related toxicity and potentially prevent the emergence of antifungal drug resistance. Much of the evidence that supports TDM is circumstantial. This document reviews the available literature and provides a series of recommendations for TDM of antifungal agents.

Pharmacokinetics, safety, and tolerability of oral posaconazole administered in single and multiple doses in healthy adults.

Mark Laughlin,  Rachel Courtney,  Gino Lim … (2003)
The pharmacokinetics, safety, and tolerability of posaconazole, an investigational triazole antifungal, were evaluated following the administration of rising single and multiple oral doses. A total of 103 healthy adults were enrolled in two phase I trials. Each study had a double-blind, placebo-controlled, parallel-group design with a rising single-dose (RSD) or rising multiple-dose (RMD) scheme. In the RSD study, subjects received single doses of posaconazole oral tablets (50 to 1200 mg) or placebo. In the RMD study, subjects received posaconazole oral tablets (50 to 400 mg) or placebo twice daily for 14 days. By using model-independent methods, the area under the plasma concentration-time curve and the maximum concentration in plasma were determined and used to assess dose proportionality. In the RSD study, the levels of posaconazole in plasma increased proportionally between the 50- and 800-mg dose range, with saturation of absorption occurring above 800 mg. Dose proportionality was also observed in the RMD study. In both studies, the apparent volume of distribution was large (range, 343 to 1341 liters) and the terminal-phase half-life was long (range, 25 to 31 h). Posaconazole was well tolerated at all dose levels, and the adverse events were not dose dependent. No clinically significant changes in clinical laboratory test values or electrocardiograms were observed. Following the administration of single and twice-daily rising doses, the level of posaconazole exposure increased in a dose-proportional manner. The long elimination-phase half-life of posaconazole supports once- or twice-daily dosing in clinical trials; however, additional studies are required to determine if further division of the dose will enhance exposure.