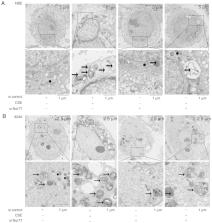 Chronic obstructive pulmonary disease (COPD) is characterized by partially reversible airflow limitation and persistent alveolar destruction, and autophagy is involved in the pathogenesis of cigarette smoke (CS)-induced COPD. Nuclear receptor 77 (Nur77) participates in a number of biological processes, including apoptosis, autophagy and in disease pathogenesis; however, the role of Nur77 in COPD remains unknown. Thus, in this study, we aimed to elucidate the role of Nur77 in COPD. We report that CS promotes Nur77 expression and nuclear export in vivo and in vitro, which increases cigarette smoke extract (CSE)-induced autophagy. In addition, we found that lung tissues, human bronchial epithelial (HBE) cells and A549 cells exposed to CS or CSE expressed lower levels of LC3 and Beclin-1 and contained fewer autophagosomes following Nur77 knockdown with siRNA-Nur77. Moreover, a co-immunoprecipitation assay demonstrated that CSE promoted autophagy, partly by accelerating the interaction between Nur77 and Bcl2, in turn leading to the increased dissociation of Bcl2 from Beclin-1; by contrast, leptomycin B (LMB) suppressed the dissociation of Bcl2 from Beclin-1. Taken together, the findings of this study demonstrate that Nur77 is involved in the CSE-induced autophagic death of lung cells, and that this process is partially dependent on the increased interaction between Nur77 and Bcl2, and on the dissociation of Bcl2 from Beclin-1. This study illustrates the role of Nur77 in bronchial and alveolar destruction following exposure to CS.

Critical role of IL-17RA in immunopathology of influenza infection.

Nathan Ross,  C Crowe,  Derek A. Pociask … (2009)
Acute lung injury due to influenza infection is associated with high mortality, an increase in neutrophils in the airspace, and increases in tissue myeloperoxidase (MPO). Because IL-17A and IL-17F, ligands for IL-17 receptor antagonist (IL-17RA), have been shown to mediate neutrophil migration into the lung in response to LPS or Gram-negative bacterial pneumonia, we hypothesized that IL-17RA signaling was critical for acute lung injury in response to pulmonary influenza infection. IL-17RA was critical for weight loss and both neutrophil migration and increases in tissue myeloperoxidase (MPO) after influenza infection. However, IL-17RA was dispensable for the recruitment of CD8(+) T cells specific for influenza hemagglutinin or nucleocapsid protein. Consistent with this, IL-17RA was not required for viral clearance. However, in the setting of influenza infection, IL-17RA(-/-) mice showed significantly reduced levels of oxidized phospholipids, which have previously been shown to be an important mediator in several models of acute lung injury, including influenza infection and gastric acid aspiration. Taken together, these data support targeting IL-17 or IL-17RA in acute lung injury due to acute viral infection.

N Reynolds,  Hubertus Jersmann,  Jessica Ahern … (2007)
Chronic obstructive pulmonary disease (COPD) is associated with defective efferocytosis (apoptosis and alveolar macrophage [AM] phagocytic function) that may lead to secondary necrosis and tissue damage. We investigated ex vivo AM phagocytic ability and recognition molecules (CD36, integrin alphaVbeta3, CD31, CD91, CD44) using flow cytometry. The transferrin receptor (CD71) was measured as an indicator of monocyte-macrophage differentiation in bronchoalveolar lavage (BAL). Proliferation was assessed with Ki-67. Based on evidence of systemic involvement in COPD, blood from 17 current smokers and 25 ex-smokers with COPD, 22 healthy smokers, and 20 never-smoking control subjects was also investigated. BAL was collected from 10 to 16 subjects in each group. Levels of recognition molecules and cAMP were assessed after exposure of AM to cigarette smoke in vitro. The phagocytic ability of AM was significantly decreased in both COPD groups and in healthy smokers compared with control subjects. However, phagocytic capacity was better in subjects with COPD who had ceased smoking, compared with those who were still smoking. AM from current smokers with COPD and healthy smokers exhibited reduced CD31, CD91, CD44, and CD71, and enhanced Ki-67 compared with healthy never-smoker control subjects. There were no differences in these markers in AM from ex-smokers with COPD compared with control subjects, or in blood monocytes from any group. Suppressive effects of cigarette smoke on AM recognition molecules associated with an increase in cAMP were confirmed in vitro. Our data indicates that a smoking-related reduction in AM phagocytic ability and expression of several important recognition molecules may be at least partially normalized in those subjects with COPD who have ceased smoking.