Meristem size contributes to the robustness of phyllotaxis in Arabidopsis 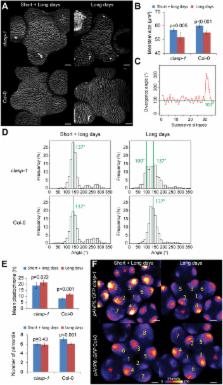 Phyllotaxis describes the regular position of leaves and flowers along plant stems. It is demonstrated that errors in this pattern can be related to meristem size and day length.

Alexis Peaucelle,  Siobhan A. Braybrook,  Laurent Le Guillou … (2011)
Tissue mechanics have been shown to play a key role in the regulation of morphogenesis in animals [1-4] and may have an equally important role in plants [5-9]. The aerial organs of plants are formed at the shoot apical meristem following a specific phyllotactic pattern [10]. The initiation of an organ from the meristem requires a highly localized irreversible surface deformation, which depends on the demethylesterification of cell wall pectins [11]. Here, we used atomic force microscopy (AFM) to investigate whether these chemical changes lead to changes in tissue mechanics. By mapping the viscoelasticity and elasticity in living meristems, we observed increases in tissue elasticity, correlated with pectin demethylesterification, in primordia and at the site of incipient organs. Measurements of tissue elasticity at various depths showed that, at the site of incipient primordia, the first increases occurred in subepidermal tissues. The results support the following causal sequence of events: (1) demethylesterification of pectin is triggered in subepidermal tissue layers, (2) this contributes to an increase in elasticity of these layers-the first observable mechanical event in organ initiation, and (3) the process propagates to the epidermis during the outgrowth of the organ. Copyright © 2011 Elsevier Ltd. All rights reserved.

Dietrich Reinhardt,  C Kuhlemeier,  T Mandel (2000)
Leaves originate from the shoot apical meristem, a small mound of undifferentiated tissue at the tip of the stem. Leaf formation begins with the selection of a group of founder cells in the so-called peripheral zone at the flank of the meristem, followed by the initiation of local growth and finally morphogenesis of the resulting bulge into a differentiated leaf. Whereas the mechanisms controlling the switch between meristem propagation and leaf initiation are being identified by genetic and molecular analyses, the radial positioning of leaves, known as phyllotaxis, remains poorly understood. Hormones, especially auxin and gibberellin, are known to influence phyllotaxis, but their specific role in the determination of organ position is not clear. We show that inhibition of polar auxin transport blocks leaf formation at the vegetative tomato meristem, resulting in pinlike naked stems with an intact meristem at the tip. Microapplication of the natural auxin indole-3-acetic acid (IAA) to the apex of such pins restores leaf formation. Similarly, exogenous IAA induces flower formation on Arabidopsis pin-formed1-1 inflorescence apices, which are blocked in flower formation because of a mutation in a putative auxin transport protein. Our results show that auxin is required for and sufficient to induce organogenesis both in the vegetative tomato meristem and in the Arabidopsis inflorescence meristem. In this study, organogenesis always strictly coincided with the site of IAA application in the radial dimension, whereas in the apical-basal dimension, organ formation always occurred at a fixed distance from the summit of the meristem. We propose that auxin determines the radial position and the size of lateral organs but not the apical-basal position or the identity of the induced structures.

Redundancy and specialization among plant microRNAs: role of the MIR164 family in developmental robustness.

Elliot Meyerowitz,  Patrick Sieber,  José Luis Riechmann … (2007)
In plants, members of microRNA (miRNA) families are often predicted to target the same or overlapping sets of genes. It has thus been hypothesized that these miRNAs may act in a functionally redundant manner. This hypothesis is tested here by studying the effects of elimination of all three members of the MIR164 family from Arabidopsis. It was found that a loss of miR164 activity leads to a severe disruption of shoot development, in contrast to the effect of mutation in any single MIR164 gene. This indicates that these miRNAs are indeed functionally redundant. Differences in the expression patterns of the individual MIR164 genes imply, however, that redundancy among them is not complete, and that these miRNAs show functional specialization. Furthermore, the results of molecular and genetic analyses of miR164-mediated target regulation indicate that miR164 miRNAs function to control the transcript levels, as well as the expression patterns, of their targets, suggesting that they might contribute to developmental robustness. For two of the miR164 targets, namely CUP-SHAPED COTYLEDON1 (CUC1) and CUC2, we provide evidence for their involvement in the regulation of growth and show that their derepression in miR164 loss-of-function mutants is likely to account for most of the mutant phenotype.