Patient medical costs for tuberculosis treatment and impact on adherence in China: a systematic review 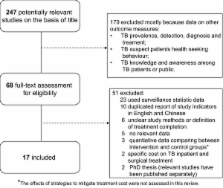 Charging for tuberculosis (TB) treatment could reduce completion rates, particularly in the poor. We identified and synthesised studies that measure costs of TB treatment, estimates of adherence and the potential impact of charging on treatment completion in China.

Low income patients, defined at household or district level, pay a total of US$ 149 to 724 (RMB 1241 to 5228) for medical costs for a treatment course; as a percentage of annual household income, estimates range from 42% to 119%. One national survey showed 73% of TB patients at the time of the survey had interrupted or suspended treatment, and estimates from 9 smaller more recent studies showed that the proportion of patients at the time of the survey who had run out of drugs or were not taking them ranged from 3 to 25%. Synthesis of surveys and qualitative research indicate that cost is the most cited reason for default.

Despite a policy of free drug treatment for TB in China, health services charge all income groups, and costs are high. Adherence measured in cross sectional surveys is often low, and the cumulative failure to adhere is likely to be much higher. These findings may be relevant to those concerned with the development and spread of multi-drug resistant TB. New strategies need to take this into account and ensure patient adherence.

Adam Wagstaff,  Magnus Lindelow,  Gao Jun … (2009)
In 2003, China launched a heavily subsidized voluntary health insurance program for rural residents. We combine differences-in-differences with matching methods to obtain impact estimates, using data collected from program administrators, health facilities and households. The scheme has increased outpatient and inpatient utilization, and has reduced the cost of deliveries. But it has not reduced out-of-pocket expenses per outpatient visit or inpatient spell. Out-of-pocket payments overall have not been reduced. We find heterogeneity across income groups and implementing counties. The program has increased ownership of expensive equipment among central township health centers but has had no impact on cost per case.

Matteo Zignol,  Christopher Dye,  Abigail Wright … (2006)
The global number of incident cases of multidrug-resistant (MDR) tuberculosis (TB) in 2000 was estimated to be 272,906 (95% confidence interval [CI], 184,948-414,295). For accurate planning of TB control programs, this estimate and others have been revised using data from additional countries and by including in the model previously treated TB cases, which had not been accounted for in the previous analysis. Multiple logistic regression was used to identify variables that were predictive of MDR-TB frequency among new and previously treated cases surveyed in 90 and 77 countries, respectively. These variables were then used to estimate MDR-TB frequencies in countries that had not been surveyed. The total number of MDR-TB cases estimated to have occurred worldwide in 2004 is 424,203 (95% CI, 376,019-620,061), or 4.3% (95% CI, 3.8%-6.1%) of all new and previously treated TB cases. In the same year, 181,408 (95% CI, 135,276-319,017) MDR-TB cases were estimated to have occurred among previously treated TB cases alone. Three countries--China, India, and the Russian Federation--accounted for 261,362 (95% CI, 180,779-414,749) MDR-TB cases, or 62% of the estimated global burden. These updated sets of estimates incorporating previously treated TB cases call for an urgent plan to expand appropriate diagnostic and treatment services for patients with MDR-TB in low-resource settings.

The Chinese health system at a crossroads.

Winnie Yip,  William C Hsiao (2020)
The Chinese government has committed to increasing government funding for health care by directing 1-1.5 percent of its gross domestic product to universal basic health care. However, China is at a loss as to how to transform its new money into efficient and effective health care. This paper critically examines the various options currently under heated debate in China. We argue that unless China tackles the root cause of unaffordable health care--rapid cost inflation caused by an irrational and wasteful health care delivery system--much of the new money is likely to be captured by providers as higher income and profits.