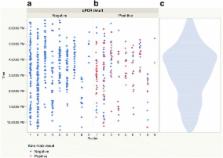 Understanding and quantifying the sources and implications of error in the measurement of helminth egg intensity using Kato-Katz (KK) and the newly emerging “gold standard” quantitative polymerase chain reaction (qPCR) technique is necessary for the appropriate design of epidemiological studies, including impact assessments for deworming programs.

Repeated measurements of Ascaris lumbricoides infection intensity were made from samples collected in western Kenya using the qPCR and KK techniques. These data were combined with data on post-treatment worm expulsions. Random effects regression models were used to quantify the variability associated with different technical and biological factors for qPCR and KK diagnosis. The relative precision of these methods was compared, as was the precision of multiple qPCR replicates.

For both KK and qPCR, intensity measurements were largely determined by the identity of the stool donor. Stool donor explained 92.4% of variability in qPCR measurements and 54.5% of observed measurement variance for KK. An additional 39.1% of variance in KK measurements was attributable to having expelled adult A. lumbricoides worms following anthelmintic treatment. For qPCR, the remaining 7.6% of variability was explained by the efficiency of the DNA extraction (2.4%), plate-to-plate variability (0.2%) and other residual factors (5%). Differences in replicate measurements by qPCR were comparatively small. In addition to KK variability based on stool donor infection levels, the slide reader was highly statistically significant, although it only explained 1.4% of the total variation. In a comparison of qPCR and KK variance to mean ratios under ideal conditions, the coefficient of variation was on average 3.6 times larger for KK highlighting increased precision of qPCR.

Person-to-person differences explain the majority of variability in egg intensity measurements by qPCR and KK, with very little additional variability explained by the technical factors associated with the practical implementation of these techniques. qPCR provides approximately 3.6 times more precision in estimating A. lumbricoides egg intensity than KK, and could potentially be made more cost-effective by testing each sample only once without diminishing the power of a study to assess population-level intensity and prevalence.

How to Calculate Sample Size for Different Study Designs in Medical Research?

Diagnosis of Soil-Transmitted Helminths in the Era of Preventive Chemotherapy: Effect of Multiple Stool Sampling and Use of Different Diagnostic Techniques