Tropical rainfall over the last two millennia: evidence for a low-latitude hydrologic seesaw 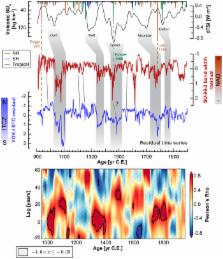 The presence of a low- to mid-latitude interhemispheric hydrologic seesaw is apparent over orbital and glacial-interglacial timescales, but its existence over the most recent past remains unclear. Here we investigate, based on climate proxy reconstructions from both hemispheres, the inter-hemispherical phasing of the Intertropical Convergence Zone (ITCZ) and the low- to mid-latitude teleconnections in the Northern Hemisphere over the past 2000 years. A clear feature is a persistent southward shift of the ITCZ during the Little Ice Age until the beginning of the 19th Century. Strong covariation between our new composite ITCZ-stack and North Atlantic Oscillation (NAO) records reveals a tight coupling between these two synoptic weather and climate phenomena over decadal-to-centennial timescales. This relationship becomes most apparent when comparing two precisely dated, high-resolution paleorainfall records from Belize and Scotland, indicating that the low- to mid-latitude teleconnection was also active over annual-decadal timescales. It is likely a combination of external forcing, i.e., solar and volcanic, and internal feedbacks, that drives the synchronous ITCZ and NAO shifts via energy flux perturbations in the tropics.

Response of the ITCZ to Northern Hemisphere cooling

Migrations and dynamics of the intertropical convergence zone.

Tapio Schneider,  Tobias Bischoff,  Gerald Haug (2014)
Rainfall on Earth is most intense in the intertropical convergence zone (ITCZ), a narrow belt of clouds centred on average around six degrees north of the Equator. The mean position of the ITCZ north of the Equator arises primarily because the Atlantic Ocean transports energy northward across the Equator, rendering the Northern Hemisphere warmer than the Southern Hemisphere. On seasonal and longer timescales, the ITCZ migrates, typically towards a warming hemisphere but with exceptions, such as during El Niño events. An emerging framework links the ITCZ to the atmospheric energy balance and may account for ITCZ variations on timescales from years to geological epochs.

Timing and climate forcing of volcanic eruptions for the past 2,500 years.

M Sigl,  M Winstrup,  J McConnell … (2015)
Volcanic eruptions contribute to climate variability, but quantifying these contributions has been limited by inconsistencies in the timing of atmospheric volcanic aerosol loading determined from ice cores and subsequent cooling from climate proxies such as tree rings. Here we resolve these inconsistencies and show that large eruptions in the tropics and high latitudes were primary drivers of interannual-to-decadal temperature variability in the Northern Hemisphere during the past 2,500 years. Our results are based on new records of atmospheric aerosol loading developed from high-resolution, multi-parameter measurements from an array of Greenland and Antarctic ice cores as well as distinctive age markers to constrain chronologies. Overall, cooling was proportional to the magnitude of volcanic forcing and persisted for up to ten years after some of the largest eruptive episodes. Our revised timescale more firmly implicates volcanic eruptions as catalysts in the major sixth-century pandemics, famines, and socioeconomic disruptions in Eurasia and Mesoamerica while allowing multi-millennium quantification of climate response to volcanic forcing.