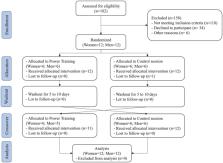 Background: The efficacy of power training (PT) to acutely reduce blood pressure (BP) in participants with hypertension is controversial, and no studies have assessed the influence of sex on post-exercise hypotension and its mechanisms in older adults.

Purpose: The aims of this secondary, exploratory analysis were to compare the effects of a single bout of PT on post-exercise hypotension, BP variability, and endothelial function between older men and women with hypertension.

Methods: Twenty-four participants with hypertension (12 men and 12 women aged to >60 years old) took part in this crossover study and randomly performed two experimental sessions: power exercise training (PT) and non-exercising control session (Con). The PT protocol was composed of 3 sets of 8–10 repetitions of five exercises performed in the following order: leg press, bench press, knee extension, upright row, and knee flexion, using an intensity corresponding to 50% of one repetition maximal test (1RM) and 2-min intervals between sets and exercises. The concentric phase of exercises during each repetition was performed “as fast as possible,” while the eccentric phase lasted 1 to 2 s. During Con, the participants remained at seated rest on the same exercise machines, but without any exercise. Each protocol lasted 40 min. Office BP, flow-mediated dilatation (FMD), 24-h ambulatory BP, and the average real variability (ARV) of systolic and diastolic BP were assessed before and after experimental sessions.

Conclusion: In older adults with hypertension, the office BP response after the experimental sessions was different in men and women, showing that the PT protocol is more effective to acutely reduce BP in men. Additionally, the mechanisms behind this reduction remain unclear. This finding suggests that sex cannot be combined to analyze post-exercise hypotension.

Wojtek Chodzko-Zajko, David Proctor, Maria Fiatarone Singh … (2009)
The purpose of this Position Stand is to provide an overview of issues critical to understanding the importance of exercise and physical activity in older adult populations. The Position Stand is divided into three sections: Section 1 briefly reviews the structural and functional changes that characterize normal human aging, Section 2 considers the extent to which exercise and physical activity can influence the aging process, and Section 3 summarizes the benefits of both long-term exercise and physical activity and shorter-duration exercise programs on health and functional capacity. Although no amount of physical activity can stop the biological aging process, there is evidence that regular exercise can minimize the physiological effects of an otherwise sedentary lifestyle and increase active life expectancy by limiting the development and progression of chronic disease and disabling conditions. There is also emerging evidence for significant psychological and cognitive benefits accruing from regular exercise participation by older adults. Ideally, exercise prescription for older adults should include aerobic exercise, muscle strengthening exercises, and flexibility exercises. The evidence reviewed in this Position Stand is generally consistent with prior American College of Sports Medicine statements on the types and amounts of physical activity recommended for older adults as well as the recently published 2008 Physical Activity Guidelines for Americans. All older adults should engage in regular physical activity and avoid an inactive lifestyle.

Resistance exercise for muscular strength in older adults: a meta-analysis.

Mark D Peterson, Matthew Rhea, Ananda Sen … (2010)
The effectiveness of resistance exercise for strength improvement among aging persons is inconsistent across investigations, and there is a lack of research synthesis for multiple strength outcomes. The systematic review followed the Preferred Reporting Items for Systematic Reviews and Meta-Analyses (PRISMA) recommendations. A meta-analysis was conducted to determine the effect of resistance exercise (RE) for multiple strength outcomes in aging adults. Randomized-controlled trials and randomized or non-randomized studies among adults > or = 50 years, were included. Data were pooled using random-effect models. Outcomes for 4 common strength tests were analyzed for main effects. Heterogeneity between studies was assessed using the Cochran Q and I(2) statistics, and publication bias was evaluated through physical inspection of funnel plots as well as formal rank-correlation statistics. A linear mixed model regression was incorporated to examine differences between outcomes, as well as potential study-level predictor variables. Forty-seven studies were included, representing 1079 participants. A positive effect for each of the strength outcomes was determined however there was heterogeneity between studies. Regression revealed that higher intensity training was associated with greater improvement. Strength increases ranged from 9.8 to 31.6 kg, and percent changes were 29+/-2, 24+/-2, 33+/-3, and 25+/-2, respectively for leg press, chest press, knee extension, and lat pull. RE is effective for improving strength among older adults, particularly with higher intensity training. Findings therefore suggest that RE may be considered a viable strategy to prevent generalized muscular weakness associated with aging. 2010 Elsevier Ireland Ltd. All rights reserved.

David Moher, Philippe Ravaud, Kenneth F Schulz … (2017)
Incomplete and inadequate reporting is an avoidable waste that reduces the usefulness of research. The CONSORT (Consolidated Standards of Reporting Trials) Statement is an evidence-based reporting guideline that aims to improve research transparency and reduce waste. In 2008, the CONSORT Group developed an extension to the original statement that addressed methodological issues specific to trials of nonpharmacologic treatments (NPTs), such as surgery, rehabilitation, or psychotherapy. This article describes an update of that extension and presents an extension for reporting abstracts of NPT trials. To develop these materials, the authors reviewed pertinent literature published up to July 2016; surveyed authors of NPT trials; and conducted a consensus meeting with editors, trialists, and methodologists. Changes to the CONSORT Statement extension for NPT trials include wording modifications to improve readers' understanding and the addition of 3 new items. These items address whether and how adherence of participants to interventions is assessed or enhanced, description of attempts to limit bias if blinding is not possible, and specification of the delay between randomization and initiation of the intervention. The CONSORT extension for abstracts of NPT trials includes 2 new items that were not specified in the original CONSORT Statement for abstracts. The first addresses reporting of eligibility criteria for centers where the intervention is performed and for care providers. The second addresses reporting of important changes to the intervention versus what was planned. Both the updated CONSORT extension for NPT trials and the CONSORT extension for NPT trial abstracts should help authors, editors, and peer reviewers improve the transparency of NPT trial reports.

This article was submitted to Exercise Physiology, a section of journal Frontiers in Physiology