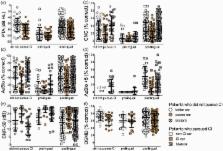 Considerable advancements in cochlear implant technology (e.g., electric acoustic stimulation) and assessment materials have yielded expanded criteria. Despite this, it is unclear whether individuals with better audiometric thresholds and speech understanding are being referred for cochlear implant workup and pursuing cochlear implantation. The purpose of this study was to characterize the mean auditory and demographic profile of adults presenting for preoperative cochlear implant workup. Data were collected prospectively for all adult preoperative workups at Vanderbilt from 2013 to 2015. Subjects included 287 adults (253 postlingually deafened) with a mean age of 62.3 years. Each individual was assessed using the minimum speech test battery, spectral modulation detection, subjective questionnaires, and cognitive screening. Mean consonant-nucleus-consonant word scores, AzBio sentence scores, and pure-tone averages for postlingually deafened adults were 10%, 13%, and 89 dB HL, respectively, for the ear to be implanted. Seventy-three individuals (25.4%) met labeled indications for Hybrid-L and 207 individuals (72.1%) had aidable hearing in the better hearing ear to be used in a bimodal hearing configuration. These results suggest that mean speech understanding evaluated at cochlear implant workup remains very low despite recent advancements. Greater awareness and insurance accessibility may be needed to make cochlear implant technology available to those who qualify for electric acoustic stimulation devices as well as individuals meeting conventional cochlear implant criteria.

Robyn Cox,  Genevieve Alexander (1995)
To develop and evaluate a shortened version of the Profile of Hearing Aid Benefit, to be called the Abbreviated Profile of Hearing Aid Benefit, or APHAB. The Profile of Hearing Aid Benefit (PHAB) is a 66-item self-assessment, disability-based inventory that can be used to document the outcome of a hearing aid fitting, to compare several fittings, or to evaluate the same fitting over time. Data from 128 completed PHABs were used to select items for the Abbreviated PHAB. All subjects were elderly hearing-impaired who wore conventional analog hearing aids. Statistics of score distributions and psychometric properties of each of the APHAB subscales were determined. Data from 27 similar subjects were used to examine the test-retest properties of the instrument. Finally, equal-percentile profiles were generated for unaided, aided and benefit scores obtained from successful wearers of linear hearing aids. The APHAB uses a subset of 24 of the 66 items from the PHAB, scored in four 6-item subscales. Three of the subscales, Ease of Communication, Reverberation, and Background Noise address speech understanding in various everyday environments. The fourth subscale, Aversiveness of Sounds, quantifies negative reactions to environmental sounds. The APHAB typically requires 10 minutes or less to complete, and it produces scores for unaided and aided performance as well as hearing aid benefit. Test-retest correlation coefficients were found to be moderate to high and similar to those reported in the literature for other scales of similar content and length. Critical differences for each subscale taken individually were judged to be fairly large, however, smaller differences between two tests from the same individual can be significant if the three speech communication subscales are considered jointly. The APHAB is a potentially valuable clinical instrument. It can be useful for quantifying the disability associated with a hearing loss and the reduction of disability that is achieved with a hearing aid.

Cochlear implants: a remarkable past and a brilliant future.

Peter Wilson,  Karen F Dorman (2008)
The aims of this paper are to (i) provide a brief history of cochlear implants; (ii) present a status report on the current state of implant engineering and the levels of speech understanding enabled by that engineering; (iii) describe limitations of current signal processing strategies; and (iv) suggest new directions for research. With current technology the "average" implant patient, when listening to predictable conversations in quiet, is able to communicate with relative ease. However, in an environment typical of a workplace the average patient has a great deal of difficulty. Patients who are "above average" in terms of speech understanding, can achieve 100% correct scores on the most difficult tests of speech understanding in quiet but also have significant difficulty when signals are presented in noise. The major factors in these outcomes appear to be (i) a loss of low-frequency, fine structure information possibly due to the envelope extraction algorithms common to cochlear implant signal processing; (ii) a limitation in the number of effective channels of stimulation due to overlap in electric fields from electrodes; and (iii) central processing deficits, especially for patients with poor speech understanding. Two recent developments, bilateral implants and combined electric and acoustic stimulation, have promise to remediate some of the difficulties experienced by patients in noise and to reinstate low-frequency fine structure information. If other possibilities are realized, e.g., electrodes that emit drugs to inhibit cell death following trauma and to induce the growth of neurites toward electrodes, then the future is very bright indeed.