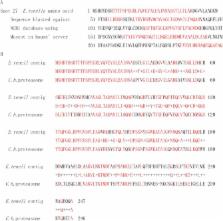 The apicomplexan protozoans Eimeria spp. cause coccidioses, the most common intestinal diseases in chickens. Coccidiosis is associated with significant animal welfare issues and has a high economic impact on the poultry industry. Lack of a full understanding of immunogenic molecules and their precise functions involved in the Eimeria life cycles may limit development of effective vaccines and drug therapies. In this study, immunoproteomic approaches were used to define the antigenic protein repertoire from the total proteins of unsporulated Eimeria tenella oocysts. Approximately 101 protein spots were recognized in sera from chickens infected experimentally with E. tenella. Forty-six spots of unsporulated oocysts were excised from preparative gels and identified by matrix-assisted laser desorption ionization time-of-flight MS (MALDI-TOF-MS) and MALDI-TOF/TOF-MS. For unsporulated oocysts, 13 known proteins of E. tenella and 17 homologous proteins to other apicomplexan or protozoan parasites were identified using the ‘Mascot’ server. The remaining proteins were searched against the E. tenella protein sequence database using the ‘Mascot in-house’ search engine (version 2.1) in automated mode, and 12 unknown proteins were identified. The amino acid sequences of the unknown proteins were searched using BLAST against non-redundant sequence databases (NCBI), and 9 homologous proteins in unsporulated oocyst were found homologous to proteins of other apicomplexan parasites. These findings may provide useful evidence for understanding parasite biology, pathogenesis, immunogenicity and immune evasion mechanisms of E. tenella.

The genome of Cryptosporidium hominis.

Ping Xu,  Giovanni Widmer,  Yingping Wang … (2004)
Cryptosporidium species cause acute gastroenteritis and diarrhoea worldwide. They are members of the Apicomplexa--protozoan pathogens that invade host cells by using a specialized apical complex and are usually transmitted by an invertebrate vector or intermediate host. In contrast to other Apicomplexans, Cryptosporidium is transmitted by ingestion of oocysts and completes its life cycle in a single host. No therapy is available, and control focuses on eliminating oocysts in water supplies. Two species, C. hominis and C. parvum, which differ in host range, genotype and pathogenicity, are most relevant to humans. C. hominis is restricted to humans, whereas C. parvum also infects other mammals. Here we describe the eight-chromosome approximately 9.2-million-base genome of C. hominis. The complement of C. hominis protein-coding genes shows a striking concordance with the requirements imposed by the environmental niches the parasite inhabits. Energy metabolism is largely from glycolysis. Both aerobic and anaerobic metabolisms are available, the former requiring an alternative electron transport system in a simplified mitochondrion. Biosynthesis capabilities are limited, explaining an extensive array of transporters. Evidence of an apicoplast is absent, but genes associated with apical complex organelles are present. C. hominis and C. parvum exhibit very similar gene complements, and phenotypic differences between these parasites must be due to subtle sequence divergence.

P Keeling,  P Kissinger,  Naomi Fast … (2001)
The phylum Apicomplexa encompasses a large number of intracellular protozoan parasites, including the causative agents of malaria (Plasmodium), toxoplasmosis (Toxoplasma), and many other human and animal diseases. Apicomplexa have recently been found to contain a relic, nonphotosynthetic plastid that has attracted considerable interest as a possible target for therapeutics. This plastid is known to have been acquired by secondary endosymbiosis, but when this occurred and from which type of alga it was acquired remain uncertain. Based on the molecular phylogeny of glyceraldehyde-3-phosphate dehydrogenase (GAPDH) genes, we provide evidence that the apicomplexan plastid is homologous to plastids found in dinoflagellates-close relatives of apicomplexa that contain secondary plastids of red algal origin. Surprisingly, apicomplexan and dinoflagellate plastid-targeted GAPDH sequences were also found to be closely related to the plastid-targeted GAPDH genes of heterokonts and cryptomonads, two other groups that contain secondary plastids of red algal origin. These results address several outstanding issues: (1) apicomplexan and dinoflagellate plastids appear to be the result of a single endosymbiotic event which occurred relatively early in eukaryotic evolution, also giving rise to the plastids of heterokonts and perhaps cryptomonads; (2) apicomplexan plastids are derived from a red algal ancestor; and (3) the ancestral state of apicomplexan parasites was photosynthetic.