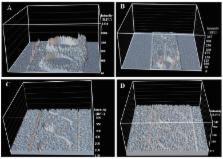 This paper describes the use of an analytical microfluidic sensor for accelerating chemo-repellent response and strong anti-bacterial 1-(Thien-2-yl)-3-(2, 6-difluoro phenyl) prop-2-en-1-one (1-TDPPO). The chemically-synthesized antimicrobial agent, which included prop-2-en-1-one and difluoro phenyl groups, was moving through an optically transparent polydimethylsiloxane (PDMS) microfluidic sensor with circular obstacles arranged evenly. The response, growth and distribution of fluorescent labeling Pseudomonas aeruginosa PAO1 against the antimicrobial agent were monitored by confocal laser scanning microscope (CLSM). The microfluidic sensor along with 1-TDPPOin this study exhibits the following advantages: (i) Real-time chemo-repellent responses of cell dynamics; (ii) Rapid eradication of biofilm by embedded obstacles and powerful antibacterial agents, which significantly reduce the response time compared to classical methods; (iii) Minimal consumption of cells and antimicrobial agents; and (iv) Simplifying the process of the normalization of the fluorescence intensity and monitoring of biofilm by captured images and datasets.

From the Cover: Bacterial flagellum as a propeller and as a rudder for efficient chemotaxis.

S. Chattopadhyay,  Shuo-Lun Wu,  Tuba Altindal … (2011)
We investigate swimming and chemotactic behaviors of the polarly flagellated marine bacteria Vibrio alginolyticus in an aqueous medium. Our observations show that V. alginolyticus execute a cyclic, three-step (forward, reverse, and flick) swimming pattern that is distinctively different from the run-tumble pattern adopted by Escherichia coli. Specifically, the bacterium backtracks its forward swimming path when the motor reverses. However, upon resuming forward swimming, the flagellum flicks and a new swimming direction is selected at random. In a chemically homogeneous medium (no attractant or repellent), the consecutive forward t(f) and backward t(b) swimming times are uncorrelated. Interestingly, although t(f) and t(b) are not distributed in a Poissonian fashion, their difference Δt = |t(f) - t(b)| is. Near a point source of attractant, on the other hand, t(f) and t(b) are found to be strongly correlated, and Δt obeys a bimodal distribution. These observations indicate that V. alginolyticus exploit the time-reversal symmetry of forward and backward swimming by using the time difference to regulate their chemotactic behavior. By adopting the three-step cycle, cells of V. alginolyticus are able to quickly respond to a chemical gradient as well as to localize near a point source of attractant.

An update on Pseudomonas aeruginosa biofilm formation, tolerance, and dispersal.

Johannes Harmsen,  Annelieke M. K. Harmsen,  Liang Yang … (2010)
We review the recent advances in the understanding of the Pseudomonas aeruginosa biofilm lifestyle from studies using in vitro laboratory setups such as flow chambers and microtiter trays. Recent work sheds light on the role of nutrients, motility, and quorum sensing in structure formation in P. aeruginosa biofilms. The second messenger, c-di-GMP, is established as an important regulator of the synthesis of polysaccharide and protein components of the biofilm matrix. Extracellular DNA is shown to be an essential component of the biofilm matrix. It has become apparent that biofilm formation involves interactions between different subpopulations. The molecular mechanisms underlying the tolerance of biofilm bacteria to antimicrobial agents are beginning to be unraveled, and new knowledge has been obtained regarding the environmental cues and regulatory mechanisms involved in biofilm dispersal.

H. Mao,  P. Cremer,  M D Manson (2003)
We have developed a microfluidic assay for bacterial chemotaxis in which a gradient of chemoeffectors is established inside a microchannel via diffusion between parallel streams of liquid in laminar flow. The random motility and chemotactic responses to L-aspartate, L-serine, L-leucine, and Ni(2+) of WT and chemotactic-mutant strains of Escherichia coli were measured. Migration of the cells was quantified by counting the cells accumulating in each of 22 outlet ports. The sensitivity of the assay is attested to by the significant response of WT cells to 3.2 nM L-aspartate, a concentration three orders of magnitude lower than the detection limit in the standard capillary assay. The response to repellents was as robust and easily recorded as the attractant response. A surprising discovery was that L-leucine is sensed by Tar as an attractant at low concentrations and by Tsr as a repellent at higher concentrations. This assay offers superior performance and convenience relative to the existing assays to measure bacterial tactic responses, and it is flexible enough to be used in a wide range of different applications.