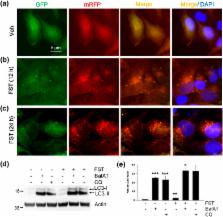 The neuronal accumulation of phosphorylated tau plays a critical role in the pathogenesis of Alzheimer’s disease (AD). Here, we examined the effect of fisetin, a flavonol, on tau levels. Treatment of cortical cells or primary neurons with fisetin resulted in significant decreases in the levels of phosphorylated tau. In addition, fisetin decreased the levels of sarkosyl-insoluble tau in an active GSK-3β-induced tau aggregation model. However, there was no difference in activities of tau kinases and phosphatases such as protein phosphatase 2A, irrespective of fisetin treatment. Fisetin activated autophagy together with the activation of transcription factor EB (TFEB) and Nrf2 transcriptional factors. The activation of autophagy including TFEB is likely due to fisetin-mediated mammalian target of rapamycin complex 1 (mTORC1) inhibition, since the phosphorylation levels of p70S6 kinase and 4E-BP1 were decreased in the presence of fisetin. Indeed, fisetin-induced phosphorylated tau degradation was attenuated by chemical inhibitors of the autophagy-lysosome pathway. Together the results indicate that fisetin reduces levels of phosphorylated tau through the autophagy pathway activated by TFEB and Nrf2. Our result suggests fisetin should be evaluated further as a potential preventive and therapeutic drug candidate for AD.

Carlo Ballatore, Virginia M-Y Lee, John Trojanowski (2007)
Advances in our understanding of the mechanisms of tau-mediated neurodegeneration in Alzheimer's disease (AD) and related tauopathies, which are characterized by prominent CNS accumulations of fibrillar tau inclusions, are rapidly moving this previously underexplored disease pathway to centre stage for disease-modifying drug discovery efforts. However, controversies abound concerning whether or not the deleterious effects of tau pathologies result from toxic gains-of-function by pathological tau or from critical losses of normal tau function in the disease state. This Review summarizes the most recent advances in our knowledge of the mechanisms of tau-mediated neurodegeneration to forge an integrated concept of those tau-linked disease processes that drive the onset and progression of AD and related tauopathies.