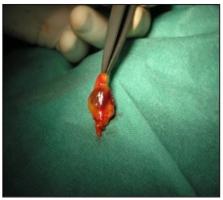 Sentinel lymph node biopsy (SLNB) is a well-established procedure for staging clinically node-negative early breast cancer (BC). Superparamagnetic iron oxide (SPIO) demonstrated efficacy for nodal identification using a magnetic probe after local retroaeroal interstitial injection. Its benefits lie in its flexibility, which is an essential property in the global setting, where access to the isotope is difficult. To the best of our knowledge, this is the first study to evaluate the feasibility and safety of the SPIO for SLNB in BC patients treated with neoadjuvant chemotherapy (NAC). Seventy-four female patients were included. The median time of lymph node retrieval was 20 min. The median number of resected sentinel nodes (SNs) was 4. SN was detected in all patients. No serious adverse event was observed. SPIO in identifying SN in BC patients after NAC is feasible and oncologically safe.

Karen L Josephson,  G Elizondo,  R Weissleder … (1990)
An ultrasmall superparamagnetic iron oxide (USPIO) preparation was developed that is small enough to migrate across the capillary wall, a prerequisite in the design of targetable particulate pharmaceuticals. Seventy percent of particles were smaller than 10 nm; 26%, smaller than 5 nm. The blood half-life of USPIO in rats was 81 minutes, considerably longer than that of larger superparamagnetic iron oxide preparations such as AMI-25 (6 minutes). Electron microscopy demonstrated that USPIO particles transmigrate the capillary wall by means of vesicular transport and through interendothelial junctions. Twenty-four hours after intravenous administration, 3.6% of the injected dose per gram of tissue was found in lymph nodes, 2.9% per gram in bone marrow, 6.3% per gram in liver, and 7.1% per gram in spleen. The major potential applications for USPIO are as (a) an intravenous contrast agent for the lymphatic system, (b) a bone marrow contrast agent, (c) a long-half-life perfusion agent for brain and heart, and (d) the magnetic moiety in organ-targeted superparamagnetic contrast agents for magnetic resonance imaging.