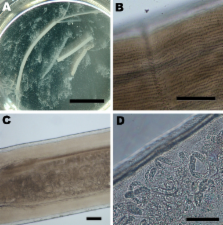 Dirofilaria repens, a filarial nematode of dogs and other carnivores, can accidentally infect humans. Clinical symptoms are usually restricted to a subcutaneous nodule containing a single infertile parasite. Here, we report a case of D. repens infection with a subcutaneous gravid worm and the patient’s concomitant meningoencephalitis and aphasia.

Emanuele Ferri,  Michela Barbuto,  Odile Bain … (2009)
Background We compared here the suitability and efficacy of traditional morphological approach and DNA barcoding to distinguish filarioid nematodes species (Nematoda, Spirurida). A reliable and rapid taxonomic identification of these parasites is the basis for a correct diagnosis of important and widespread parasitic diseases. The performance of DNA barcoding with different parameters was compared measuring the strength of correlation between morphological and molecular identification approaches. Molecular distance estimation was performed with two different mitochondrial markers (coxI and 12S rDNA) and different combinations of data handling were compared in order to provide a stronger tool for easy identification of filarioid worms. Results DNA barcoding and morphology based identification of filarioid nematodes revealed high coherence. Despite both coxI and 12S rDNA allow to reach high-quality performances, only coxI revealed to be manageable. Both alignment algorithm, gaps treatment, and the criteria used to define the threshold value were found to affect the performance of DNA barcoding with 12S rDNA marker. Using coxI and a defined level of nucleotide divergence to delimit species boundaries, DNA barcoding can also be used to infer potential new species. Conclusion An integrated approach allows to reach a higher discrimination power. The results clearly show where DNA-based and morphological identifications are consistent, and where they are not. The coherence between DNA-based and morphological identification for almost all the species examined in our work is very strong. We propose DNA barcoding as a reliable, consistent, and democratic tool for species discrimination in routine identification of parasitic nematodes.

Human dirofilariasis due to Dirofilaria (Nochtiella) repens: an update of world literature from 1995 to 2000.

S Pampiglione,  F Rivasi (2000)
Following on from their review of 1995 (Pampiglione et al.), the authors present an update of human cases of dirofilariasis due to Dirofilaria (Nochtiella) repens (Nematoda, Filarioidea, Onchocercidae) reported in the world literature. Cases of the parasitosis published from 1995 to 2000 are reported country by country. The essential data are presented in tabular form and the clinical, parasitological, histopathological, epidemiological features are analysed. 372 new cases spread over 25 countries are thus added to the list published in 1995. The countries most affected are Italy, Sri Lanka, some republics of the ex-Soviet Union. The age of the patients varied from 4 months to 100 years, the majority being in their 40s. There was virtually no difference in incidence between sexes. The parasite appeared most frequently in the upper half of the body, particularly in the head and ocular region and also in the upper limbs. Cases of visceral involvement are also reported. Of the various forms of human dirofilariasis, that due to D. (N.) repens is confirmed to be the most important as regards not only the number of subjects affected and the wide geographical distribution but also the variety of organs involved, notably the lungs, the male genitals and the female breast, invariably leading to a wrong diagnosis of malignant tumour. In man, the zoonosis may be described as emerging: whereas until the middle of the last century only a few dozen cases were reported, in the last 50 years the number has gradually increased to reach the present 782.

Dirofilariasis due to Dirofilaria repens in Italy, an emergent zoonosis: report of 60 new cases.

F Rivasi,  G Angeli,  A Ramponi … (2001)
Sixty new cases of human dirofilariasis due to Dirofilaria repens, occurring in Italy between 1990 and 1999, are presented. This is the most extensive case study of this zoonosis reported worldwide by a single study group. The aim is to utilize this large experience to characterize the different histopathological findings in the parasitic lesions in man. Diagnosis was performed on histological sections of the nematode enclosed in the nodules excised at biopsy or surgery. The nematode was located in the subcutaneous tissue (49 cases), the epididymis (two cases), the spermatic cord (two cases), the lung (two cases), the breast (two cases), the omentum (two cases) and under the conjunctival tissue (one case). The majority of cases (46) were from Piedmont; the remainder were from Emilia-Romagna, Sardinia, Sicily, Tuscany, Apulia and Lombardy. The histopathological features of the lesions are described and the clinical and epidemiological aspects of the zoonosis are discussed. The prevalence in Italy in general and in the area of Piedmont in particular, comprising the provinces of Alessandria, Asti, Novara and Vercelli, which is one of the most severely affected areas of the world, is emphasized. The evident increase in the number of cases in the last few years is a clear indication that it is an emergent zoonosis. We recommend that each and every case observed be recorded, to enable the true extent of human dirofilariasis in Italy to be assessed, and that a reference centre be set up in the area to collate the data. The importance of the histopathologist's role in the diagnosis is stressed.