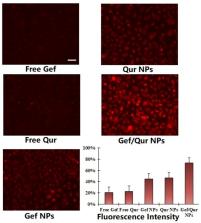 This study aims to develop a novel co-delivery gefitinib and quercetin system loaded with PLGA-PEG nanoparticles and evaluate their antitumor activity in vitro and in vivo.

Gef/Qur NPs were prepared and characterized. The release of drugs, stability, cellular uptake and cytotoxicity were evaluated in vitro. The antitumor effects and systemic toxicity of different formulations were also investigated.

Gef/Qur NPs displayed a smaller particle size and a PDI and zeta potential of 0.11 and −23.5 mV, respectively. The hydrophobic Gef and Qur content in NPs reached up to 65.2% and 56.4%, respectively, and their high entrapment efficiencies recorded 83.7% and 82.3%, respectively. The in vitro release of Gef/Qur from the NPs was sustained for 12 h. Compared with control groups, Gef/Qur NPs showed higher cellular uptake and cell inhibition rates. In vivo studies identified the lungs as the target tissue and the region of maximum drug release. Through pharmacodynamics analysis, we found that two drugs (Gef and Qur) were incorporated into one nanoparticle carrier, which played a good role in generating synergistic effect.

It is concluded that PLGA-PEG is an ideal drug carrier for the co-delivery of Gef/Qur to treat lung cancer.

Shang-Gin Wu,  Jin-Yuan Shih (2018)
Recent advances in diagnosis and treatment are enabling a more targeted approach to treating lung cancers. Therapy targeting the specific oncogenic driver mutation could inhibit tumor progression and provide a favorable prognosis in clinical practice. Activating mutations of epidermal growth factor receptor (EGFR) in non-small cell lung cancer (NSCLC) are a favorable predictive factor for EGFR tyrosine kinase inhibitors (TKIs) treatment. For lung cancer patients with EGFR-exon 19 deletions or an exon 21 Leu858Arg mutation, the standard first-line treatment is first-generation (gefitinib, erlotinib), or second-generation (afatinib) TKIs. EGFR TKIs improve response rates, time to progression, and overall survival. Unfortunately, patients with EGFR mutant lung cancer develop disease progression after a median of 10 to 14 months on EGFR TKI. Different mechanisms of acquired resistance to first-generation and second-generation EGFR TKIs have been reported. Optimal treatment for the various mechanisms of acquired resistance is not yet clearly defined, except for the T790M mutation. Repeated tissue biopsy is important to explore resistance mechanisms, but it has limitations and risks. Liquid biopsy is a valid alternative to tissue re-biopsy. Osimertinib has been approved for patients with T790M-positive NSCLC with acquired resistance to EGFR TKI. For other TKI-resistant mechanisms, combination therapy may be considered. In addition, the use of immunotherapy in lung cancer treatment has evolved rapidly. Understanding and clarifying the biology of the resistance mechanisms of EGFR-mutant NSCLC could guide future drug development, leading to more precise therapy and advances in treatment.