Effect of Exposure to Famine during Early Life on Risk of Metabolic Syndrome in Adulthood: A Meta-Analysis 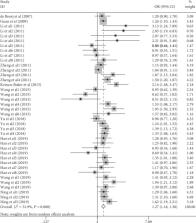 Emerging studies have explored the association between the famine exposure during early life and the risk of the metabolic syndrome, and the results remain controversial. This meta-analysis was performed to summarize the famine effects on the prevalence of metabolic syndrome (MetS) in adulthood. Materials and Methods. We searched the PubMed, Web of Science, Embase, ScienceDirect, and Chinese National Knowledge Infrastructure for relevant studies up to December 2019. Pooled odd ratios (ORs) with 95% confidence intervals (CIs) were used to estimate the effect exposure to famine on MetS using a random-effects model, and the I 2 was used to evaluate the heterogeneity.

This meta-analysis suggests that exposure to famine during early life may increase the risk of MetS in adulthood.

Soo A Lim,  Hayley Shin,  Jung Han Song … (2011)
OBJECTIVE The number of people with metabolic syndrome is increasing worldwide, and changes in socioenvironmental factors contribute to this increase. Therefore, investigation of changes in metabolic syndrome and its components in South Korea, where rapid socioenvironmental changes have occurred in recent years, would be foundational in setting up an effective strategy for reducing this increasing trend. RESEARCH DESIGN AND METHODS We compared the prevalence and pattern of metabolic syndrome among participants in the Korean National Health and Nutrition Examination Surveys for 1998, 2001, 2005, and 2007. In each survey, stratified, multistage, probability–sampling designs and weighting adjustments were conducted to represent the entire Korean population. The revised National Cholesterol Education Program criteria were used as the definition of metabolic syndrome. All biochemical parameters were measured in a central laboratory. RESULTS A total of 6,907 (mean ± SE age 45.0 ± 0.2 years), 4,536 (45.5 ± 0.2), 5,373 (47.1 ± 0.2), and 2,890 (49.9 ± 0.3) Koreans over 20 years of age have participated in the studies in 1998, 2001, 2005, and 2007, respectively. The age-adjusted prevalence of metabolic syndrome increased significantly from 24.9% in 1998, 29.2% in 2001, and 30.4% in 2005 to 31.3% in 2007. Among the five components, the level of low HDL cholesterol increased the most, by 13.8% over the 10 years. Abdominal obesity and hypertriglyceridemia followed, with 8.7 and 4.9% increases, respectively. CONCLUSIONS Because dyslipidemia and abdominal obesity were major factors in increasing the prevalence of metabolic syndrome in Koreans for the past 10 years, lifestyle interventions should be conducted at the national level to reduce the burden and consequences of metabolic syndrome.

Obesity at the age of 50 y in men and women exposed to famine prenatally.

Natalie D Barker,  A C J Ravelli,  C Osmond … (1999)
It was shown that men who were conceived during the Dutch famine of 1944-1945 had higher rates of obesity at age 19 y than those conceived before or after it. Our objective was to study the effects of prenatal exposure to the Dutch famine on obesity in women and men at age 50 y. We measured the body size of 741 people born at term between November 1943 and February 1947 in Amsterdam. We compared people exposed to famine in late, mid, or early gestation (exposed participants) with those born before or conceived after the famine period (nonexposed participants). The body mass index (BMI; in kg/m(2)) of 50-y-old women exposed to famine in early gestation was significantly higher by 7. 4% (95% CI: 0.7%, 14.5%) than that of nonexposed women. BMI did not differ significantly in women exposed in mid gestation (-2.1%; -7.0%, 3.1%) or in late gestation (-1.3%; -6.3%, 3.9%). In 50-y-old men, BMI was not significantly affected by exposure to famine during any stage of gestation: BMI differed by 0.4% (-3.5%, 4.5%) in men exposed to famine in late gestation, by -1.2% (-5.5%, 3.3%) in those exposed in mid gestation, and by 0.5% (-4.6%, 6.0%) in those exposed in early gestation compared with nonexposed men. Maternal malnutrition during early gestation was associated with higher BMI and waist circumference in 50-y-old women but not in men. These findings suggest that pertubations of central endocrine regulatory systems established in early gestation may contribute to the development of abdominal obesity in later life.