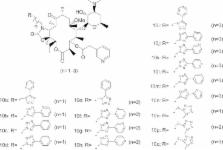 R.Jason Herr (2002)
5-Substituted-1H-tetrazoles (RCN4H) are often used as metabolism-resistant isosteric replacements for carboxylic acids (RCO2H) in SAR-driven medicinal chemistry analogue syntheses. This review provides a brief summary of the medicinal chemistry of tetrazolic acids and highlights some examples of tetrazole-containing drug substances in the current literature. A survey of representative literature procedures for the preparation of 5-substituted-1H-tetrazoles, focusing on preparations from aryl and alkyl nitriles, is presented in sections by generalized synthetic methods.

Review of macrolides and ketolides: focus on respiratory tract infections.

M Dueck,  James Karlowsky,  Lavern M Vercaigne … (2000)
The first macrolide, erythromycin A, demonstrated broad-spectrum antimicrobial activity and was used primarily for respiratory and skin and soft tissue infections. Newer 14-, 15- and 16-membered ring macrolides such as clarithromycin and the azalide, azithromycin, have been developed to address the limitations of erythromycin. The main structural component of the macrolides is a large lactone ring that varies in size from 12 to 16 atoms. A new group of 14-membered macrolides known as the ketolides have recently been developed which have a 3-keto in place of the L-cladinose moiety. Macrolides reversibly bind to the 23S rRNA and thus, inhibit protein synthesis by blocking elongation. The ketolides have also been reported to bind to 23S rRNA and their mechanism of action is similar to that of macrolides. Macrolide resistance mechanisms include target site alteration, alteration in antibiotic transport and modification of the antibiotic. The macrolides and ketolides exhibit good activity against gram-positive aerobes and some gram-negative aerobes. Ketolides have excellent activity versus macrolide-resistant Streptococcus spp. Including mefA and ermB producing Streptococcus pneumoniae. The newer macrolides, such as azithromycin and clarithromycin, and the ketolides exhibit greater activity against Haemophilus influenzae than erythromycin. The bioavailability of macrolides ranges from 25 to 85%, with corresponding serum concentrations ranging from 0.4 to 12 mg/L and area under the concentration-time curves from 3 to 115 mg/L x h. Half-lives range from short for erythromycin to medium for clarithromycin, roxithromycin and ketolides, to very long for dirithromycin and azithromycin. All of these agents display large volumes of distribution with excellent uptake into respiratory tissues and fluids relative to serum. The majority of the agents are hepatically metabolised and excretion in the urine is limited, with the exception of clarithromycin. Clinical trials involving the macrolides are available for various respiratory infections. In general, macrolides are the preferred treatment for community-acquired pneumonia and alternative treatment for other respiratory infections. These agents are frequently used in patients with penicillin allergies. The macrolides are well-tolerated agents. Macrolides are divided into 3 groups for likely occurrence of drug-drug interactions: group 1 (e.g. erythromycin) are frequently involved, group 2 (e.g. clarithromycin, roxithromycin) are less commonly involved, whereas drug interactions have not been described for group 3 (e.g. azithromycin, dirithromycin). Few pharmacoeconomic studies involving macrolides are presently available. The ketolides are being developed in an attempt to address the increasingly prevalent problems of macrolide-resistant and multiresistant organisms.

Synthesis and antibacterial activity of a novel series of acylides: 3-O-(3-pyridyl)acetylerythromycin A derivatives.

Shigeo Morimoto,  Tetsuya Tanikawa,  Kazuya Kameo … (2003)
A novel series of acylides, 3-O-(aryl)acetylerythromycin A derivatives, were synthesized and evaluated. These compounds have significant potent antibacterial activity against not only Gram-positive pathogens, including inducibly macrolide-lincosamide-streptogramin B (MLS(B))-resistant and efflux-resistant strains, but also Gram-negative pathogens, such as H. influenzae. 6,9:11,12-dicarbonate acylide 47 (FMA0122) was twice as active against H. influenzae than azithromycin, whereas it showed only moderate in vivo efficacy in mouse protection tests. However, the 11,12-carbamate acylide 19 (TEA0929), which showed potent antibacterial activity against almost all of the main causative pathogens of community-acquired pneumonia tested, exhibited excellent in vivo efficacy comparable to those of second-generation macrolides.