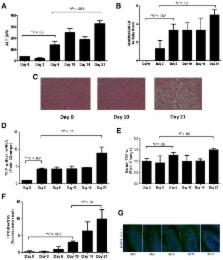 Emerging data suggest that changes in intestinal permeability and increased gut microbial translocation contribute to the inflammatory pathway involved in nonalcoholic steatohepatitis (NASH) development. Numerous studies have investigated the association between increased intestinal permeability and NASH. Our meta-analysis of this association investigates the underlying mechanism.

A meta-analysis was performed to compare the rates of increased intestinal permeability in patients with NASH and healthy controls. To further address the underlying mechanism of action, we studied changes in intestinal permeability in a diet-induced (methionine-and-choline-deficient; MCD) murine model of NASH. In vitro studies were also performed to investigate the effect of MCD culture medium at the cellular level on hepatocytes, Kupffer cells, and intestinal epithelial cells.

Fengjun Wang,  Tracey Turner,  Edwina D Witkowski … (2005)
Numerous intestinal diseases are characterized by immune cell activation and compromised epithelial barrier function. We have shown that cytokine treatment of epithelial monolayers increases myosin II regulatory light chain (MLC) phosphorylation and decreases barrier function and that these are both reversed by MLC kinase (MLCK) inhibition. The aim of this study was to determine the mechanisms by which interferon (IFN)-gamma and tumor necrosis factor (TNF)-alpha regulate MLC phosphorylation and disrupt epithelial barrier function. We developed a model in which both cytokines were required for barrier dysfunction. Barrier dysfunction was also induced by TNF-alpha addition to IFN-gamma-primed, but not control, Caco-2 monolayers. TNF-alpha treatment of IFN-gamma-primed monolayers caused increases in both MLCK expression and MLC phosphorylation, suggesting that MLCK is a TNF-alpha-inducible protein. These effects of TNF-alpha were not mediated by nuclear factor-kappaB. However, at doses below those needed for nuclear factor-kappaB inhibition, sulfasalazine was able to prevent TNF-alpha-induced barrier dysfunction, MLCK up-regulation, and MLC phosphorylation. Low-dose sulfasalazine also prevented morphologically evident tight junction disruption induced by TNF-alpha. These data show that IFN-gamma can prime intestinal epithelial monolayers to respond to TNF-alpha by disrupting tight junction morphology and barrier function via MLCK up-regulation and MLC phosphorylation. These TNF-alpha-induced events can be prevented by the clinically relevant drug sulfasalazine.

Role of innate immunity and the microbiota in liver fibrosis: crosstalk between the liver and gut.

This is an open access article under the CC BY-NC-ND license ( http://creativecommons.org/licenses/by-nc-nd/4.0/).