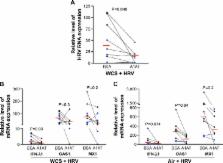 Human rhinovirus (HRV) infections target airway epithelium and are the leading cause of acute exacerbations of COPD. Cigarette smoke (CS) increases the severity of viral infections, but there is no effective therapy for HRV infection. We determined whether α1-antitrypsin (A1AT) reduces HRV-16 infection in CS-exposed primary human airway epithelial cells. Brushed bronchial epithelial cells from normal subjects and patients diagnosed with COPD were cultured at air–liquid interface to induce mucociliary differentiation. These cells were treated with A1AT or bovine serum albumin for 2 hours and then exposed to air or whole cigarette smoke (WCS) with or without HRV-16 (5×10 4 50% Tissue Culture Infective Dose [TCID 50]/transwell) infection for 24 hours. WCS exposure significantly increased viral load by an average of fivefold and decreased the expression of antiviral genes interferon-λ1, OAS1, and MX1. When A1AT was added to WCS-exposed cells, viral load significantly decreased by an average of 29-fold. HRV-16 infection significantly increased HRV-16 receptor intercellular adhesion molecule-1 messenger RNA expression in air-exposed cells, which was decreased by A1AT. A1AT-mediated reduction of viral load was not accompanied by increased epithelial antiviral gene expression or by inhibiting the activity of 3C protease involved in viral replication or maturation. Our findings demonstrate that A1AT treatment prevents a WCS-induced increase in viral load and for the first time suggest a therapeutic effect of A1AT on HRV infection.

The ABCs of rhinoviruses, wheezing, and asthma.

James Gern (2010)
Human rhinoviruses (HRVs) were discovered as common cold pathogens over 50 years ago. Recent advances in molecular viral diagnostics have led to an appreciation of their role in more-significant respiratory illnesses, including bronchiolitis in infancy, childhood pneumonia, and acute exacerbations of chronic respiratory diseases such as asthma, chronic obstructive lung disease, and cystic fibrosis. Until a few years ago, only two groups of HRVs (A and B) had been recognized. However, full and partial sequencing of HRVs led to the discovery of a third species of HRV (HRV-C) that has distinct structural and biologic features. Risk factors and pathogenic mechanisms for more-severe HRV infections are being defined, and yet fundamental questions persist about mechanisms relating this common pathogen to allergic diseases and asthma. The close relationship between HRV infections and asthma suggests that antiviral treatments could have a major impact on the morbidity associated with this chronic respiratory disease.

Joshua Kennedy,  Ronald B Turner,  Thomas Braciale … (2012)
Since its discovery in 1956, rhinovirus (RV) has been recognized as the most important virus producing the common cold syndrome. Despite its ubiquity, little is known concerning the pathogenesis of RV infections, and some of the research in this area has led to contradictions regarding the molecular and cellular mechanisms of RV-induced illness. In this article, we discuss the pathogenesis of this virus as it relates to RV-induced illness in the upper and lower airway, an issue of considerable interest in view of the minimal cytopathology associated with RV infection. We endeavor to explain why many infected individuals exhibit minimal symptoms or remain asymptomatic, while others, especially those with asthma, may have severe, even life-threatening, complications (sequelae). Finally, we discuss the immune responses to RV in the normal and asthmatic host focusing on RV infection and epithelial barrier integrity and maintenance as well as the impact of the innate and adaptive immune responses to RV on epithelial function. Copyright © 2012 Elsevier B.V. All rights reserved.